Sepiroth - Breaking the Codes of Silence (2009) 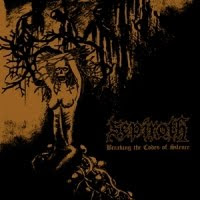 Dutch death grinders Sepiroth have released their debut album for free online, a wise decision so many people can check it out and order the hard copy when it arrives. Whether or not you will do such a thing, of course, depends on how much you like the band's penchant for grinding, Scandinavian-style death metal. Breaking the Codes of Silence certainly offers enough of a rocking (and blasting) to get the blood flowing through the old veins, but through much of the album you realize it's already been done before, often enough that mileage here might vary.

If you take the roots of Swedish death metal (Entombed & Grave), embellish them with a grinding tendency (ala Nasum or Rotten Sound), add a few stomping breakdowns and a dash of Dutch old school (Sinister and maybe a little Pestilence), you arrive at this album. There is enough melody and early, evil riffing from the dawn of death metal to keep the album hovering above the edge of mediocrity, and enough brutality and groove to sate the more modern thug. The best songs on the album are those which can perfectly balance all the band's influences, such as "Amarous on Death" which fuses some good melodies and leads into a slew of quality riffing, or "Unending Echobrain" which breaks out a nice stomping breakdown. The final two tracks on the album, "Until Proven Guilty" and "Dying for Hatred", are also among the best the band has to offer, the latter breaking into a pure punkish Entombed rhythm.

The mix of Breaking the Codess... is likely to please pundits of the early Swedish scene, for its thick guitar tone and dense and dark overall atmosphere. The quality of riffs across the album tend towards positive, but there are few which surprise or impress in such a crowded genre (especially in recent years, when hundreds of bands are headed back to this style). It's not great, but it's good enough. And again, Sepiroth has given you the option to check the album out for free, so i you're hard into this style it's a resounding no-brainer.