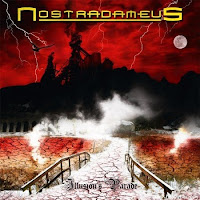 It seems like only yesterday that I first heard this band and thought their first few records (Words of Nostradameus and The Prophet of Evil) showed some potential for the field of melodic German power/speed metal. Since then, their output has had a mixed quality, each album offering a few hooky tunes and the rest forgettable. Illusion's Parade is their sixth offering, and though it does absolutely nothing to offend, it suffers again from a lack of memorable writing.

Alas, this is the only complaint I can make here, because from a technical standpoint, the album sounds great. The tones are rather raw for power metal, the band wisely avoids the over-produced, over-tracked logistical nightmare that several of their peers hold as the standard for their recordings. The guitars have bite and power, whether in the driving rhythms of "The Mariner" bridge riffs, or the anthemic, classically fused rhythms of "Walk On Pain" or "Armageddon Forever". The vocals of Freddy Persson can explore highs and even growls, but he usually walks the path between, for a harsher sound akin to Piet Sielck (Iron Savior). Throughout the album, there are electronic beats/elements often incorporated into the rhythms. You could say it was a 'modern' power metal album, and truth be told, more complex than most of the sword-wielding, rainbow flower offerings out there. Some of the better songs here, "Nothing" had the most glory and emotion, and "Eclipse ov the Suncult" and "Armageddon Forever" the best riffs.

Illusion's Parade is tight, efficient and show's a maturity in the band's writing since their earlier era at the turn of the century. Despite its many qualities, it just doesn't stand out much in the writing department. Worth hearing if you like your power metal with some thrash/progressive elements and good musicianship, but there are no hymns you'll be thinking of a decade from now.

Highlights: The Mariner, Nothing, Eclipse ov the Suncult, Armageddon Forever