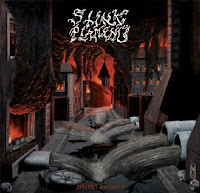 Stíny Plamenù remains one of the more interesting black metal bands around, if solely because of their sewer metal concept. I've criticized the band in the past because I never felt they used this quite enough, and it seems as if Mrtvá Komora, their fifth full-length, finally strikes the right balance. On an ironic note, it's also arguably their best album when it comes to straightforward black metal, for indeed, this is a work of blasting mayhem that simply comes at you from a new direction, with the same effect. Don't look to the woods, look to the manholes beneath your feet.

This is a fast fucking record, and if you don't have the patience to deal with manic blasting and guitar rhythms that consist of non-stop grinding rhythms that only hint at the sinister melodies of their peers, you probably will not find much interesting in its depths. The album has a similar ability to bands like Endstille to fabricate somewhat hypnotic shining riffs through the repetetive note patterns, there is always something that lifts them slightly above average. The prolific Lord Morbivad continues to snear in his native tongue, and Lord Sheafraidh remains quite the brute on the kit.

It doesn't start on a strong foot, sadly. 'Úhlavský kanalizační sběrač' is a scorcher, good and fast, but doesn't get so interesting until it's bridge rhythm with accompanying pipe clanging. Yes, this is how the 'sewage' manifests itself through much of the record, a series of clanking pipes and grates used as percussive effects. They don't add as much as you'd like, I'd honestly prefer some more echoing sounds and dripping to go along with it, but at least it makes Stíny's music ever so slightly original beyond the black metal core. These effects are used a little better in the grinding blasterpiece 'Litinový teror' and the thrashy, collapsing title track.

The material is really a mix of the more interesting melodies and atmosphere with some very standard rhythms, but I found that the latter half of the disc picks it up. 'Odpusť vodárny' has some great, eerie bass lines popping along beneath the vile riffs, and 'Zatmění plamenů' is both glorious and depressing. Taken as a whole, it's over 45 minutes of Stíny Plamenù's tighter work, though I would still give the edge to previous album Odpadní galerie if you're just getting into this band.

There is still not enough sewer in this sewer metal, I would love to see the band further their atmosphere to create something truly compelling and effective. More sampling, maybe a use of synthesizers, I'm not sure, but at least the band's lyrics and the clanging underground percussion provide proof of concept. Mrtvá Komora is tight and traditional enough to appeal to the more conservative black metal addict, with just enough variation to place it outside the norm.