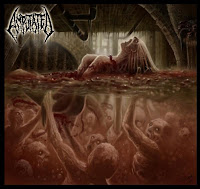 The follow-up to 2006's Gurgling With Infected Semen graces us with not only a more...interesting cover image, but a tightened slam death sound anchored by a series of chugging onslaught breakdowns and extreme guttural vocals which sound like the belching of amphibians. Woven through this swampy stomping ground are enough blasting anthems and old school death scratchings that the album manages to avoid the sucking of so many peers. Now, I'm not saying this is a great album, or even good enough to recommend, but it does have all the reagents required for fans of something like, say, Devourment, albeit delivered with a cleaner mix.

Like many bands on the gore offensive, Amputated like to use samples to open many of their perverse provocations, and some of these are funny: 'It looks like something that fell off my dick during the war' to open the chug-chug-chug of "Repugnant Genital Deformity", for example. The album boasts the canny and good cheer of titles like "Cunt Like a Sewer", "Uterus Swollen With Festering Putrescence", "Slam Pig", the lighter fun of "Projectile Beer Vomit", and the rather novel "Dripping Ovipositor". Choosing the musical merit of individual tracks is meaningless here, Wading Through Rancid Offal is 30 minutes of grooving slam sections, blast breaks and the rest in between, with no particular riffs rising above the morass. It's hugely consistent, and would probably make a perfectly paced live set.

Another positive here is the sound. The guitars cut through ears like flesh, but the low end is maintained through the frog croaking vocals of Morbid Mark, and the dense palm mute riffs which will have every drunken bastard wheeling about the club, killing everything in sight. These guys are clearly a fun band, and this alone should appeal to a specific segment of the brute population, but it's not the kind of fun I need to revisit often.