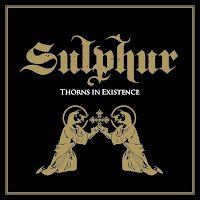 2007's Cursed Madness was a well-received debut from this Norse cult, one of the few bands out there who manage to crossbreed death and black metal into a manageable and interesting form. This follow-up, Thorns in Existence, offers progress even beyond the debut, an interesting and for the most part original work. This not only impresses via the members' musical capabilities, but the immersion into its many twisted corridors of grief and vitriol.

"Revelation" is a haunting intro piece with vocal samples, playful pianos and symphonic embellishments, it feels like clearing the cobwebs from a centuries old pub or saloon only to find ghosts within, acting as if the place were never shut down. "True Father of Lies" opens with blasting precision, a restrained, thrashing rhythm in which the the guitars slice across the palm with mutilated arpeggios and noodling, creepy rhythms. Thomas Skinlo Høyven has a mix of black and death vocals which slobber over the band's polished cadence. Through various points in the song, the band will bust out some chugging breakdowns, which succeed due to the drumming and atmosphere they are steeped in. "The Purifying Flame" is busier, with an interesting fusion of grooves and later the mathematical, start/stop chords of the verse, which later quicken into brutal black thrash. "Hunting Sickening Seas" has a cool acoustic, atmospheric dirge near its mid-point, and "Luna Noctiluca" glimmers with romance and sadness, despite its bruising rhythms. Other high points include the "Invented visions of eternal salvation" for its weird electronic impulses and hypnotic rhythms, and the freakish "Throne of Illusion".

Truly a forward thinking band, Thorns in Existence rarely disappoints. The band's rhythms might turn off some black metal purists for their more punching, thrash stylings, but if you're into the more experimental side of Norwegian metal (Arcturus, Virus, etc) you will probably only find the bare minimum of experimentation. All the elements beyond the core instrumentation are well realized here, from strings and pianos to synth and samples. A few riffs might not deliver the interesting content you'll hear across the remainder of the album, but it's still quite good to plow straight through.