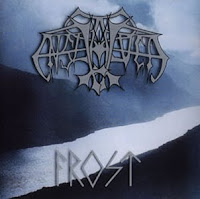 Next to the progressive, psychedelic journeys the band is producing in recent years, Frost must now seem like a primal behemoth haunting the desolate landscapes of the black metal pioneer. But even at the lowest of the band's career (Eld and Blodhemn), the great Enslaved have produced nothing but albums deserving of your respect, if not your utmost attention. And Frost is a far, far cry from the lowest, an epic of dynamic blasting and blitzing wrapped in the atmospherics of lo-fi synth work. Even at this early age, there was something quite different about the band's writing, and Frost was a diversion from the debut Vikingligr Veldi (released only 6 months earlier in '94).

The two founding fathers of the band, Ivar Bjørnson (guitars, keys) and Grutle Kjellson (vocals, bass) were joined here by the equally storied Trym Torson (Emperor, Zyklon, Tartaros, and others), whose frantic drumming is unmistakeable as it cavorts below the wandering guitar phrases and plodding, pumping bass, which is lathered in just the right amount of distortion. The keyboards here play a well balanced role, appearing only where needed, never steering or detracting from the guitar work or the central rhythms of the band. The album ranges from blasting aggression, certain to please the short attention spans of many, early extreme metal fans, to atmospheric passages and inventive rhythms which few peers were perfoming at the time. These are nowhere near as far out as later works like Mardraum, Below the Lights or Vertebrae, but in its day, many did not know what to make of this album.

The title track is a new age/ambient piece which invokes the mental imagery of thawing, frosted pines that scale a grand mountainside, each droplet of withered rain running its course to the foothills, the rivers and the mouths and cookpots of hardened, ancient men. "Loke" opens with pensive, ringing notes over crashing percussion, before bursting into life at the :30 mark with bloodthirsty speed picking and punishing blast and footwork from Trym. Truly of note is the bassplaying, which Grutle performs with flash and fury, as it coils ever below like a cold, snaking river. "Fenris" begins with spoken word Norse, before some great, curvy bass dowsed in sporadic chords and slides, breaking for acoustics and then an eruption of double-bass driven chords and further acoustics. Strikes of the synth are used deep within the depths of the track to highlight a charging rhythm, creating an atmosphere of airiness. "Svarte Vidder" is one of my favorites on the album, the way the bass and muted guitars cruise below the choral synth and then open into melodic blackness, relieved by even more coherent chaos as the snarling vocals ride across the mid-paced bashing like Sleipnir doing his morning struts. "Yggdrasil" features a guest, Eirik Hundvin, and some impressive, manly howling from Kjellson which resounds off into the atmosphere, dominating the plucky bass and mouth-harp.

"Jotunblod" is one of the the more straightforward black tracks on the album, not letting one up for air even when it hollows out to some mid-paced breaks and synth. "Gylfaginning" is another of my very favorite pieces on the album, as it rages and taunts one with a salvo of glistening, doom inspiring chords, freakish synth inserts and soaring vocals. "Wotan" is another rapid rush of ash and flame, Trym going ballistic while the guitars stream and scream above them in ribald, unrelenting fury. "Isöders dronning" is the finale, a track opening in acoustic bliss with creepy keyboards and gradually building into a more savage composition with large amounts of double bass finesse and acoustic/black interplay. The song thrives through both its driving momentum and moments of tranquillity, an epic closure as its final notes break to a halt.

Everything about Frost was top flight, from the great production values, to the great lyrics and cool packaging (the band logo and title were printed as a part of the CD case, rather than on the cover itself. Osmose did a great job with its release, and it became an early favorite for many fans of the rapidly expanding Norwegian scene. It actually remained my own favorite from the band until Below the Lights hit in 2003. There is something cold and energetic captured in this recording which is difficult to forget. It cries from the heights, like a pair of ravens who see all and transmit the forging of civilization to their master.

Verdict: Epic Win [9.5/10] (warriors are gathered through the dream)