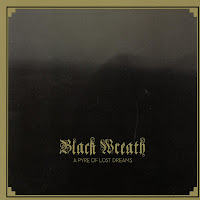 At the mere expression of the phrase 'funeral doom', my attention often crumples up like a dried parchment and withers quickly into dust, because this is not a genre of metal I usually find myself absorbed in. Playing slow and boring rhythms is not an excuse for putting out a record, and does not = DOOM. Doom is the feeling of despair created through note selection and atmosphere, something I feel many younger bands who enter the genre seriously lack an understanding of. Few of them can evoke the emotions of a Sabbath, or Pentagram, or Trouble, or even early Candlemass... and a repetitious string of poorly written riffs is truly hell to listen through, grounds for a Tylenol and probably hitting the [STOP] button sooner than not.

Black Wreath may be a mild exception, because while they do often repeat themselves too excessively in what seem to be endless songs (there are 4 tracks here at over 50 minutes of music), they at least write some pretty convincing odes to despair, that balance a crushing force of rhythm and soaring, searing melodies. This is a project of Kim Larsen, who you may recognize from other acts Saturnus, and the folkish Of the Wand and the Moon; joined by Blazing Eternity vocalist Peter Mesnickow (Larsen has also sessioned with that band) and bassist Dave Müller. Mind you, this is not the total crushing wasteland of a Skepticism or Esoteric, it adheres far more stringently to the use of an accessible melody.

"The Black Holes of Your Mind" is the longest track, and has a large task to grab your attention for over 15 minutes of playtime. The song travels through an opening rhythm with a huge, simple melody that seems to beam at you directly from the sun on a cold day, by the sea or any landscape of your choosing, as long as it is bleak. The vocals here shift between a narrative tone and crushing growls, and after nearly 6 minutes of this the guitars begin to foray elsewhere, the pace slows even further to the expected 'funeral' beat, and things start to occur...acoustic guitars that, while sparse and predictable, hit hard, and then a bit of elegaic folkish atmosphere. "Nocturnal Dominion" follows, and lacks much of the glory of the first track. This is 13 minutes of deep, meandering, cavernous doom metal that crawls at a turtle's pace, occasionally broken with some keyboards, chimes and grunts, and I must admit this was my favorite piece of the record. Immersive and submersive, and never too dull.

"Solitude Rising (Missing All Exits)" is the 3rd foray into nothingness, again very long, at 14 minutes, but it once again manages to captivating by trying something different...some very somber riffs and experimental little, fluttering bells and guitar lines that make you feel as if you're in some organic, long lost subterranean city, alive with strange beings. "Nidstong" closes the album with nearly 8 minutes of minimal rainfall, and dark, low-end pianos that echo across the sorrows. It would make a nice piece for a horror film or game, but I almost felt let down after the two better tracks.

A Pyre of Lost Dreams sounds all that, with ominous tones and well planned breaks in the boredom that save its skin from mediocrity. "Nocturnal Dominion" and "Solitude Rising" are the meat of the matter, the crust of the swollen, bleating Earth heart that is Black Wreath. The first track had nearly lost me, but these perked my interest back through their eerie depths. So, if only for that 27-28 minutes of excellence, could I recommend this to fans of extreme doom.