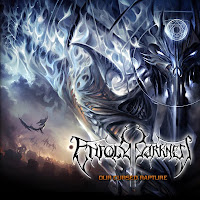 Enfold Darkness is a young band exploding out of Tennessee, with a promising debut that exists in a limbo between the realms of black, thrash, and melodic death metal. Essentially they sound like a hybrid of At the Gates-style hooks and Cradle of Filth-like vocals. Now, before everyone starts whining about how they hate these bands (if something is popular, it must suck, after all), know that Enfold Darkness do a pretty damn fine job in this sphere, and Our Cursed Rapture succeeds where many other melodic death/thrash bands of late do not. They write energetic songs with riffs that outlast the 37 minute duration of the album, and the musicianship and production are both strong.

Some might cringe at my Dani Filth comparison, but Justin Corser does have a similar, severe rasping tone, and the band contributes some backing vocals that cover the lower death grunting and some gothic, narrative garbling that marries the theme. But this is where that comparison ends, for the music is far more akin to modern melodic death. There is a mythological, conceptual feel to the album and a relentless sonic plague that gnaws at your skin with technical precision. The hyper minute that is "The Rise of the Great Fornicator" bursts into the death/thrashing rhythsm of "In the Galleries of the Utmost Evil", where you'll get the full spread of Corser's sanity scratching range, and the pummeling rhythms that are always weaving melodies. And most importantly, while the band will often break out into a slower thrash rhythm, there are no shitty metalcore breakdowns in sight! "The Benefits of Your Demise" has some nice, stomping groove rhythms which break into a descending guitar line, "Our Cursed Rapture" opens with one of the more glorious melodic hooks I've heard in recent memory. The two parts of "Exaltations" are among the highlights of the album, with some nice, tech thrashing riffs that match up well with the screech and tear of the vocals. "Dead in the Brine" and "The Sanctuaries" are also loaded to the teeth with quality momentum.

The mix of the album lives up to modern standards for clarity and quality, but it never curbs the savage mysticism of the band, though it would be interesting if they pull off such a polished precision at live performances. The leads are consistent and interesting throughout the album. Elitist jacktards will probably shun this band for its influences, modern veneer and kick, but I prefer them to similar US bands like Arsis, and this is well worth a listen if you simply want some decent riffing and energy. The band is already touring extensively, and getting their music out to popular sources (iTunes, Hot Topic, etc.) so it's likely they'll turn some drooling heads while drawing down the ire of others.

Highlights: Our Cursed Rapture, Exaltations (I & II), Dead in the Brine