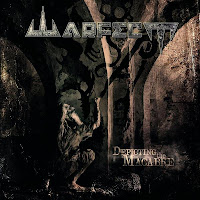 Warfect is a new band playing thrash/groove metal with a lot of very similar elements to the melodic death metal scene out of their native Sweden. Rapid fire charging rhythms, melodic guitars, huge breakdowns and a mix of aggressive vocals with cleaner chorus parts. I would say the band reminds me of The Defaced, or perhaps Soilwork without the keyboards everywhere. Fredrik Wester (formerly in Lord Belial) performs the vocals and guitars, and his accent gives the style a sort of constipated, aggressive feeling, though the cleans are really clear.

This is a band that seems to get exponentially better, the heavier the songs are. For example, the title track "Depicting the Macabre" is a scorcher, from the frantic riffing of its verses to the great breakdown, lathered in good leads to offset the simplicity of the chugging. "Supervised Life" is a bruiser with some trilling rhythms that ascend into a thrusting verse which will have all fans of The Haunted or The Defaced wringing their own necks. Other fast paced spinebreakers include "Heathen Reigns", "I Factor", "Harvest of Trinity" and "Truth Untold". The balladic "Never to Return" reminds me of something Metallica would do, a slower acoustic ballad that picks up into mid-paced metal bliss, and the vocals actually shine. On the flipside, I didn't really enjoy the grooving rhythms of the first track "Creation", so I was expecting much worse from the album.

Depicting the Macabre has a pretty good sound, the guitars crush without any excessive polish, and the acoustics glint and gleam where they appear. The drums and bass are good and loud, and this is certainly a comparable mix to many of the similar Swedish bands. I didn't love Warfect's debut, but there is enough here to satisfy fans of early Carnal Forge, as well as the bands I listed earlier in the review.