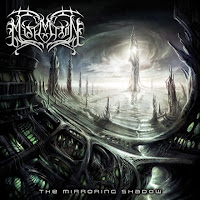 At this point in time, could it be possible that Sweden is producing more supergroups than any other nation on the metal globe? Perhaps it's just the pervasive, incestuous scene there, as I've heard jokes that every third person there is in a metal band. Well, Miseration are yet another band culled from a seasoned roster, and you'll be able to tell through not only their impressive production schema, but also the writing and diverse influence that has gone into this record.

We've got the second offering from the band, a follow-up to 2007's Your Demons - Their Angels, which I recall being the sort you'd listen to once and then discard. There is a bit of a Christian element to the band, but fear not, you will not notice through the music and there is nothing cheap or preachy about it. Speaking of Christian, the line-up here includes Christian Älvestam on vocals (also fronting Incapacity and fellow supergroup The Few Against Many, and formerly Scar Symmetry, among many other bands); Johan Ylenstrand and Marcus Bertilsson (both of Inevitable End) on bass and guitar respectively; Rolf "Stuka" Pilve on drums (formerly of Astral Sleep, Dreamtale, and others) and Jani Stefanovic (Am I Blood, Sins of Omission, DivineFire, etc) on guitars and some bass. Yes, I don't understand how they all find the time...

But here it is. Miseration performs a very bludgeoning technical death metal with a huge production. It's got blasting, frantic double bass busting, and monolithic grooves that should have every kid slamming his muscled ass off. The first track here "Dreamdecipher" comes and goes with a lot of technical precision but nothing memorable, and the following "Blueprinted Aeon Collapse" is an immediate improvement, with some fragmented blasts of insanity and a much more interesting slew of riffs. "Voyaging the Seas of Thought" is far more atmospheric, with this excellent driving, thunder to its more refined segments, and then a mix of extreme melodic death to counter it off and send it back into moshing frenzy. The title track offers some huge, bouncing melodeath parts that reminded me of Darkane, and this is another of the album's stronger tracks, with several layers of depth to it.

The latter half of the album is even better, with the punishing of "A Trail Blazed Through Time", the psychotic thrashing of "Dimorphic" and the Hypocrisy-like grinding chagrin of "Sulphury Sun". There is enough tempo shifting and style variation within the death metal context that this album has something to offer the brutal death fan and the melodeath tourist. Unlike a lot of other Swedish death, Miseration doesn't focus too highly on a Sunlight guitar tone, but what they arrive at here is quite intense. The production standards are immense.

The Mirroring Shadow is another Swedish supergroup, 'nuff said. There is a lot of quality work here, but if you're xenophobic about the more polished end of the death spectrum, this may not be for you. I didn't find this album quite so compelling as The Few Against Many debut Sot, but it's certain to blow a lot of people away.