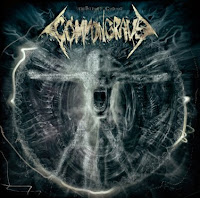 Common Grave have been tossing their hats into the German death metal game for going on a decade, and this time out managed to produce their finest hour; a third full-length full of battering ram rhythms, technical ability and an industrial, machine-like presence which is created more through their songwriting than the use of electronics. I hear a little influence of bands like Suffocation, Gorguts, Pestilence and Cryptopsy, but an exact line is difficult to trace, so they end up with a good modern hybrid of the above.

After the bleak industrial programming of "Embedding Process", they tear into a set of highly aggressive tracks. "Dethroning Duality" is built around spasms of blasting and discordant rhythm guitars similar to some of the riffs on the recent Pestilence reunion, though they also bust out a melodic thrashing rhythm in the bridge. "Fragments Once Lost" opens with a frolicking bass lick and more pummeling intensity, again with a pick-me-up, thrash rhythm that winds into a slightly slower breakdown. "Bleeding Shades of Gray" has some nice math grooves beyond its death-thrashing, and Ferenc Horvath's grunts border on guttural expulsion. "Casualty" is slightly more spry, while "Ocean" picks up from a pensive crawl to a grooving harmonic twang. There is a decent instrumental in "Decoding Sequence: Deciphering Life", and the grinding "Degradation Upgrade" was my favorite track on the album.

Embedded Coding is a well-produced album, with punchy guitar tones, audible bass and driving footwork. Conceptually the band spews a lot of socio-technological themes, and they also use some guest vocals from John Gallagher of Dying Fetus and Elliot from Beneath the Massacre. This is an exciting album. Though it may not stand far out from other tech death offerings, and it's far from a classic, it excels beyond the band's prior efforts.