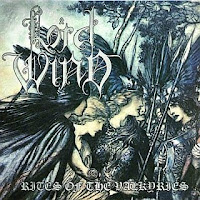 People can say a lot of things about Rob Darken: that he's controversial, that he's conservative, that his convictions place him well outside the hellride that is the modern world. But there is no denying the man's ambition, or passion for his works, and his ability to keep separate the politics and art in his endless tribute to his heritage, and the lost pagan culture and arts of Europe. Lord Wind is one of his most interesting projects, in which the raw black metal of Graveland is waylaid for the pomp and circumstance of glorious medieval folk, which he creates through synthesized atmospheres. You could think of it as an extension to some of the intros he has done for Graveland songs/albums, with each album centered around a specific concept. In the case of the third Lord Wind album, Rites of the Valkyries, the focus is the winged warmaidens of Norse legend.

Darken's writing here is far from the minimalism one might expect from a great many of the side projects you hear from many of the 'old guard' in black metal. These songs could very well score a video game or film, though they are performed on a tight budget. This album felt a little rougher around the edges than Heralds of Fight, but the style is largely the same. Synthesized vocal choirs, the crashing of programmed drums, and other keyboard simulations provide the melodies and atmosphere. This would be best compared to Mortiis' earlier work (before he got gothed up) or Summoning (sans the black metal and vocals). It's lo-fi, it's cheesy, and it's also really fun...and engaging.

"Winged Helmets" is the sorrow-sworn opening track, and the 'horns' announce the heraldry of the sky, while cymbals crash and the low percussion thunders, soon eclipsed in male vocal choirs. Immediately I was brought back to the sound programming for 16-bit video games, and how they had to make use of purely synthesized instrumentation to set mood and effect. "The Ancient Beginning" has beautiful percussion which rolls into huge horns which could have easily scored a Conan sequel, and again the booming male vocal choirs sound endearing in their digitized form. This is quite an excellent track, one of the better here. "Prophecy of the Norns" is more laid back and ancient feeling, as the keyboards vibrate off in the distance, the percussion rolling beneath like the kingdoms of clouds that must have one supported these battle angels. "Father of Wisdom" is like a creeping frost that arrives to envelop an ancient, staring statue. The track is amazingly evocative, one need only close his eyes while listening to see Odin's single eye staring at you, in both curiosity and judgment.

The next track, "Atlantean Monument", would coincidentally be used as the title of the Lord Wind album to succeed this. The song itself has synthesized horns and violins which write across the percussion. It wasn't my favorite here, the selection of notes does not inspire much attention, and even the subtle shifts of the track do not heighten its value. "Rhinemaiden's Lamentation" is a slow, sad piece with the male choirs buzzing directly through the center, and angelic female choirs joining them for a glorious cathedral-like atmosphere. Pipes enter into the middle of the track, just enough to hold interest as they wind back into the 'vocal' melody. "Dance of War" has the most uncouth, soundtrack feel here, it literally sounds like an orchestra being synthesized, with brooding, deep drums and horns which call out the brazen madness of warfare.
It's easily one of the more memorable tracks on the album. "Horn of the Summoning" ends the original album (the 2006 re-issue has a 17 minute bonus track, but I don't have that) with some more brazen, Conan-like momentum.

Rites of the Valkyries, like most of Lord Wind's material, is perfect for several occasions. Table top gaming with your friends, reading something epic, or playing on the computer are all suitable, or when strolling outdoors in a temperate clime. I suggest these not to trivialize the effort, but to give examples of experiences the music can enrich. As I mentioned above, the lo-fi recording of the tracks does give it a cheesy flair, but it can't be helped. For what it's worth, it is a fine album to listen through, and one of his better efforts outside Graveland.

Highlights: The Ancient Beginning, Prophecy of the Norns, Father of Wisdom, Dance of War