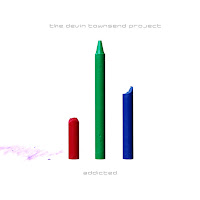 I fell off the Devy-wagon years ago, in fact I haven't been entirely impressed with any of his solo outings since perhaps Terria (though a few of the later Strapping Young Lad releases were decent). He released Ki earlier this year, and that one went right past me with little fanfare. So I was pretty stunned when hearing this new effort, Addicted. It's really good, with both the wackiness and serious skill we expect from this man, and the most enjoyable album since he was releasing stuff on the level of Infinity or Ocean Machine's Biotech.

Townsend is joined here by a healthy cast of cohorts, including Anneke van Giersbergen's guest vocals, and a few of his Devin Townsend Band members, like Brian Waddell (bass) and Ryan van Poederooyen (drums). The album is light and fun at times, but heavy and memorable in most. It maintains Devin's playful sense of humor, but despite even the most cheesy moments of the album ("Bend it Like Bender", which even features a sample of the Futurama character), it succeeds. Yes, even Townsend's pitiful lyrical skills cannot topple the music here, though he tries pretty damn hard.

"Addicted" begins the album with a simple sequence of chords, over which Anneke's vocals soar and a flurry of friendly electronics supports. When Devin's vocals arrive, they crush just like Strapping Young Lad, and in fact this track could have appeared on City and we might not know the difference. "Universe in a Ball" offers a big groove over more electro pulses, and I didn't really mind the lyrics here, they are simple but effective. The synthesizers sound amazing here over the bridge and chorus, from the simmering piano lines to the big 80s wave lines hidden against the dark backdrop of the song's atmosphere. I'll skip "Bend it Like Bender" for the chugging grace of "Supercrush", van Giersbergen's presence before the huge wall of chords helping to transcend this one into the atmosphere...a truly catchy performance from all involved. She repeats this with "Hyperdrive" and "Resolve", two more tracks which see Townsend returning to the great writing that made his old works so good...the chorus for "Resolve" is just precious.

I want resolve to receive what you'll be!
The ocean returns to the sea!!!

The album takes a little hit with "Ih-ah!", which is a little more like a soft rock version of this band that is safe for your local commercial radio station, but it's not exactly terrible. "The Way Home" gets really good, as it progresses through a volley of percussive guitar riffing into a cosmos full of carefully placed electronic impulses and shuffling drum rhythms. "Numbered" has some crushing, brief chords before another wall of Anneke erupts across the huge bottom end this band can create through the simple rock structure and myriad electronics Devy is not afraid of using. The closer is "Awake", a gentle rocking anthem with some harsher vocals on the horizon.

The production values are superb, as usual, but it's a Devin Townsend album. Those who don't want this packed, immersive, highly electronic vibe to their listening should just step off, because it is where the man excels with his studio work (on his personal projects, or those of others). In the tradition of all his stronger works, the album is polarizing: it reaches elevated, fanciful highs, often courtesy of his talented female guest, but it will also slam you in the face with a nu-thrash chugging riff and some of his snarled, pissed off vocals. It's modern, and it should not have to apologize for being so. This is essentially future pop metal, and it's a bright future. Not every track here is pristine, and the lyrics are still a little on the weak side (the concepts have an adequate depth, but he could improve the vocaulary to the same effect), but it's a lot of fun to listen to, and you could probably share it with friends who don't care for metal. Not that any of us need jerks like that in our lives!