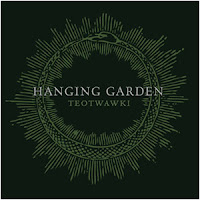 Finland's Hanging Garden have released the follow-up to their 2007 debut Inherit the Eden, which was also through Spikefarm. The band performs an organic mesh of melodic death, gothic metal and doom, though most of the character emanates from the emotional vocal performance of Ari Nieminen, whose over the top throat feels like it is truly tearing across every harsh line of lyrics. It's got a similar style to a lot of the US drone/sludge/post-hardcore bands. The music that backs him provides ample atmosphere for his miserable musings, but alone it doesn't quite capture the imagination.

Big chords, grooving rhythms, plucky acoustics and ringing ambiant guitars shelter Nieminen's pain on the opening track "Where Serpents Dwell", but though it soars for a few melodic ticks of the clock, it left little lasting impression. "The Blackbirds" fares slightly better, provided you follow its tranquil acoustics into the drudging rhythms beyond, as they plunge slowly below the vocals, organ and spicy guitar atmosphere. "Hands That Decay" features more driving sludge/doom with a simple octave chord beyond, with some acoustic bridges that really didn't add much power. "Times of Disgrace" (clever Neurosis reference?) is more sparse and experimental, I honestly liked this more than the previous tracks, if only for the quality instrumental background it created. Fans of bands like Isis and Cult of Luna might also enjoy the tracks "Oceans Away" and "The Fires of Sheol".

Hanging Garden function at a level that should appeal to those into well-produced, doom and sludge metal with a few inches of gothic penetration. They're not nearly as irritating as many of the hacks who play in this style, and their sound is more expensive than what I'm used to. But for all its atmosphere and the clarity of sound on the record, I didn't leave with much sorrow clinging to my back, which is the hallmark of a truly effective record in this style. Not an unpleasant album, but not so memorable.

Highlights: Times of Disgrace, The Fires of Sheol