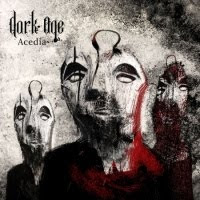 Although I seem to recall Germans Dark Age being more of a straight melodic death metal band in the past, this 6th album Acedia is an exercise in frustration. The band plays what is basically a crossover of pop music and melodic death metal, complete with several vocal styles which serve only to grate against one another and ruin what might otherwise be decent compositions, at least on a few of the tracks.

The opening chords of "Kingdom Nevercome" are pretty strong, but soon break for some electronic pop inflection, and the same melodeath/metalcore vocals you've heard a thousand times by now. These soon give way to the clean tones of Elike Freese, which sound like a hybrid of Pasi Koskinen's nasally vocals on Amorphis' Elegy or Tuonela, but mixed with a Blink 182/Linkin Park vibe (this will become more pronounced on other songs). Had Freese stuck with the melodeath grunts or just the sharper, clean vocals, it might have been more fluid, but having them both in the confines of a track serves only to cheapen each. Once the lyrics start getting sour on tracks like the awkward, bouncy "10 Steps" or the nu-grooves of "Zeitgeist", it becomes downright embarassing and silly. I was half expecting Mike Shinoda to appear and start rapping his goofy counter lines.

The album is mixed with perfect pop clarity, but about the best thing I can say is that the guitar players can rip out a few good riffs from time to time ("Devote Yourself to Nothing", "Halo Meridian", "Underneath These Burdens") which might recall a band like Soilwork or Dark Tranquillity. I also thought there were moments where the keys and guitars meshed really well to create an atmosphere, i.e. "Snake of June" or the bridge in "All the Unfulfilled", but even then the vocals and lyrics just made me cringe. Not even a guest appearance from Kai Hansen (on the bonus track "Vampyrez"....) could save this album. The album is not for me, but if there is actually a human being out there seeking a mix of Amorphis, Soilwork, Linkin Park, and other nu-metal, he or she will arrive at paradise.

Highlights: finishing this review and trying to erase my memory through the consumption of mass quantities of alcohol