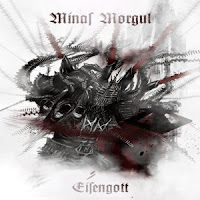 Though the glorious, charging pagan black metal formula has been beaten nearly to death at this point in time, Minas Morgul differentiate themselves from other bands in the field through their chorus-driven bass sound, which creates a boxy effect alongside the bright and raw guitar tone. The German vocals snarl and whisper in their native tongue, and the drums thunder below, audible but a mite overpowered by the rest.

The first proper track (beyond the intro) "Der letzte Tag" is glorious enough to peak the interest for more, with the thrumming of the bass and a few decent riffs. The guitars do occasionally feel cluttered here, but it gives the band a live feeling. "Sohnes Faden" has a pretty powerful lead-in riff, and a strong verse with the rolling double bass and bleeding cold streams of the guitar. The band's namesake "Minas Morgul" is another worthwhile trampling, its guitars creating elegaic atmosphere through the majestic sadness of the note selection. The bass in "Eisengott" simply pierces through the clouded battlefields that the band conjures, and other good tracks include "Rot" and the spearwall known as "Sinn und Ziel". In all, the album is quite the romp through the plains of the warfallen.

Beyond the target demographic of pagan black acolytes, I'd say fans of Amon Amarth might want to give the band a listen. The vocals are blacker, the production is nowhere near that budget, the bass sound is different, but they share a similar style of constructing simple riffs that successfully embody the lyrical concepts. It's another solid stud in the axe hilt.