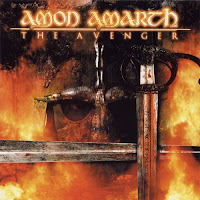 Contrary to popular belief, Amon Amarth was not the first of the Swedish Viking death metal bands, as Unleashed predated them for some years; however, they have certainly been the most successful, in recent years their albums like With Oden On Our Side and Twilight of the Thunder Gods have been huge, with an appeal that has spread even beyond the core metal crowd. Granted, many of these noobs would likely have enjoyed metal all along, if they only sat down to listen, but Amon Amarth has become a gateway band, or a 'return' for so many that have veered away to their placid hipster lives and listening rotations.

Come 1999, they were a rising force, but not yet at their peak level of popularity (which we still may not have experienced). The Avenger was their 2nd full-length offering, and the material written was a bit catchier than that found on their debut, Once Sent from the Golden Hall. It was also the first album to feature the huge line-up that the band has maintained to this day, with Johan Söderberg joining on guitar and Fredrik Andersson behind the drums. This is a seasoned, powerful album, with only 1-2 tracks slacking behind the rest, and it's honestly better than most they have released since (at least until the past few efforts, which have been stunning).

Amon Amarth take the term 'melodic death metal' to an entirely different medium, for while the band is making almost constant use of melodies over the bludgeoning death metal base, they aren't the kind of jumpy and spotty riffs used by In Flames or Dark Tranquillity. These are woven right into the foundation of the band's crushing force. Hegg is a true jarl of the north, easily shifting from his distinctive death metal growls to a blacker rasp without losing any of the thrust; Andersson is a beast; and while Mikkonen and Söderberg do not often indulge in complex riffing, they know how to level you with straightforward, hammering rhythms that best fit the band's Norse lyrical theme. Speaking of the lyrics, they've never been this band's strength, instead a pastiche of rather simplified Viking/Norse mythology which is presented to be accessible. But The Avenger is far from the worst of them.

The album wastes no time in kicking your ass with the thundering "Bleed for Ancient Gods", a song they are still making today, a decade later. Gorgeous, glorious rhythm riffs and an unending barrage of crashing drums will send you this straight to your memory. "The Last With Pagan Blood" has one of the most inspiring song titles I've ever seen, and the song itself is one of my favorites from the album, with its spear formation walls of biting sorrow. The following track "North Sea Storm" is not only the best of the album, but my favorite Amon Amarth song to date, a warlike rhythm collapsing into an eternal and distinct verse rhythm which heralds both an emotion of loss and wonderment, and a futile, atavistic clarion to battle. The band even manages to pull off a chug-down without me becoming restless, that is how good this song is, and the standard by which I just much of their other material. "Avenger" is fashioned from more subtle textures, surely the driving power of the band continues, but it thrives off its cascade of golden, fading sunlight and the plodding of its bridge rhythm.

"God, His Son and Holy Whore" was not one of my favorites here, but it maintains the thundering largesse of the album and I did enjoy the first riff. "Metalwrath" is a rather notorious track, as the band makes a jab at countrymen Hammerfall, who they supposedly had some minor feud with. The song itself is decent, but not one of the stronger on the album. "Legend of a Banished Man" thankfully bings back the glory of the first half of the record, with some great bass work by Ted Lundstrom, and a heavy as hell chugging ballast which transforms into dynamic, march-like drumming. My version of the CD also includes the bonus track "Thor Arise", which is faster than much of the other material, and not quite so memorable.

The Avenger really rides off its stronger material, but it's not an entirely kickass album. "Bleed for Ancient Gods", "The Last With Pagan Blood" and "North Sea Storm" should belong to any compilation of Amon Amarth's greatest hits, and I still listen to these today, but on the whole, the band has released superior work since (especially Twilight of the Thunder God). Viking death metal is surely not as commonplace as Viking black metal, so a band like Amon Amarth has always been welcome, and reaped the niche that Unleashed (and, to an extent, Bathory) had first carved out.