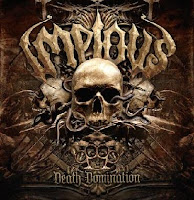 Success has ever eluded this Swedish cult of death thrashers, but after 15 years, they are still plugging away, because it is never too fucking late to try. Death Domination is the band's 6th full length offering, picking up where the rather average Holy Murder Masquerade left off. Only this time, the band seems to have an injection of fuel and vitriol which crushes their past few records. They are really, really pissed off here and the plan is to take it out on your ears. This is a fast album, so fast it slices through your perception like a vorpal blade. Imagine a band like The Haunted or Dimension Zero sped up to overdrive, racing towards the finish line as if on a line of cocaine spiked with jet fuel, steroids and jello-shots. This is Impious in 2009.

"Abomination Glorified" started with a good, rousing thrash, before quickly turning into one of those 'what the fuck was that moments' when a vehicle speeds by as your taking a piss on the side of the highway. Mikael Norén has apparently had his fleshy limbs replaced by machinery, because I just don't understand how a human being could perform at this level without breaking something at each blasting refrain. When "The Demand" arrives, you've just zipped up your fly, and another entire song has throttled past at hypersonic speed, with some great snaking chords patterns and guest vox from Johan Lindstrand (The Crown). Want a chance to catch a breath? "I Am the King" is not going to give you one, another slugging onslaught with big footwork and a few chugging slaps to the cranium. "And the Empire Shall Fall" teases you with acoustics before again running you over with an 18-wheeler of frenetic thrashing death. While the energy is appreciated, some of the better songs off the album come in its later moments. "Hate Killing Project" has some great, circular thrashing rhythms and "Rostov Ripper" is like fast-forwarding Hypocrisy's already faster material. The closing track, "Irreligious State of War" is 3+ minutes to sum up the album and break what remains of your neck clear off the spine.

Death Domination is abrasive and in your face with a pulse pounding tone, yet eschews the Sunlight tone of many Swedish peers. Fans of the faster thrashing melodeath acts like Terror 2000 and Darkane will immediately take to this material, as it rarely shows any compromise. At times, I felt like a more dynamic spectrum would have served the songwriting more than just fast fast fast kill, but I still have to admire the band's philosophy that getting older does not mean getting slower. The album isn't perfect, but it IS frantic and fun, and certainly superior to Holy Murder Masquerade or Hellucinate. Now to find a hospital.