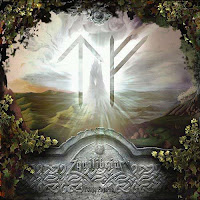 The 21st century has brought us a great many artists who walk the margins of multiple styles, without ever committing fully to one or the other. Equilibrium is one such artist, and their hybrid of death metal, symphonic and Viking elements has placed them well upon the map, with an appeal to fans of peers like Ensiferium, Thyfing, Finntroll, and Turisas. Like these other bands, I can't help but feel Bal-Sagoth was an influence with their unusual, goofy keyboard epics. Upon Turis Fratyr, the keyboard is the central element. The guitars churn and chug as needed, and sound quite thick and powerful, but the orchestration of the music is what places the writing just far enough into the memory. This was a pretty big debut album, and while it's successor Sagas is mildly superior, there are a number of tracks here I enjoyed, and a few that lay forgotten.

The band likes to perform a lot of glorious, charging rhythms, and while these can be fun and create the desired effect, often the synth lines and subcurrent riffing feels just too generic for its own good. Helge Stang can grunt or snarl, fusing a medium between the two genres which have birthed this band's sound (three if you count power metal, for which an argument could be made). The guitars and synthesizers frolic through a lot of bouncy, happy rhythms that would do any Finntroll or Korpiklaani proud, though the lyrical theme is pretty much pure Norse myth-history.

The title track is a brief, ambient intro that leads into "Wingthor's Hammer", which is a little sampling of what lies in store for the next hour of listening. It's flighty and silly sounding, but also kind of cool if you just don't bite too deeply into it. The verse guitars chug along below a slew of atmosphere, as Stang alters his vocals in an almost conversational pattern. "Unter Der Eiche" starts with some nice synths, and then another pretty glorious, if unmemorable charging gallop, before biting off the melody from the Biblical hymn "We Three Kings". "Der Sturm" builds a good momentum, though its core riff is once again fueled by a very generic pattern of notes that is easily eclipsed by anything else the band swerves into at any point in the song. "Widars Hallen" has a nice flute melody which almost feels like a sea shanty, and up to this point it may have been the most memorable track on the album, perfect for taking your girlfriend to the Renaissance Faire after watching the Peter Jackson Tolkien trilogy. "Met" is one of the most identifiable tracks on the album, sounding very much like Finntroll...almost too much. Like if you told me this was a missing track from Jakten's Tid, I might believe you, aside from a slight hint in the German lyrics.

"Heimdall's Ruf" is a bombastic, atmospheric intro the further frolicking synths of "Die Prophezeiung", which is a solid track with some nice melodic death guitar lines packed in. "Nordheim" becomes fairly fun, the synthwork is again delightful and playful like kids playing Hobbits vs. Mordor or a re-enactment of Die Nibelung at the park. I do like the way the chords function below the synth at the 2:00 point. "Im Fackelschein" features about two minutes of lush, acoustic calm, before the might of "Toten Heldensagen", which is the longest track on the album, and one of the best. I wasn't sure I'd be able to stomach 9+ minutes of Equilibrium's musings, but this has a more energetic, serious tone than most of the other songs and makes for a firm showcase of the band's potential (and it's up to the level of most of the tracks on Sagas). "Wald der Freiheit" ends the original album with another lush landscape of synth, but the bonus track "Shingo Murata" is another soaring epic which recalls Bal-Sagoth and Finntroll.

It was rather inevitable that this brand of shallower, orchestrated epic metal was going to procreate as the medium has once again grown in popularity around the world, but at least we've got some bands giving it their best. Equilibrium are no geniuses, but if you can shut off your mind for an hour then you'll find enough meat here to marinate with your delusions of historic grandeur and battle. Again, Sagas is a better representation of the band, but Turis Fratyr has a share of quality moments amidst the rather middling cavalry breaks.