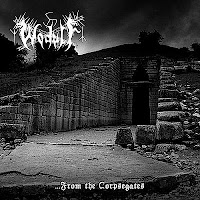 Wodulf is a Greek band within the NSBM scene, who released a demo in 2003 known as Wargus Esto. The material was rather dull and the band seemed far more heavily involved in their politics, as they are with their more prolific main project Der Stürmer. With ...from the Corpsegates, the band has veered into a more interesting lyrical direction, which focuses on magick, folklore, and ancient horror. While this is likely to put the project on more radars than their demo, the music still leaves a lot to be desired. Don't get me wrong, they've come a long way from Wargus Esto, and the writing is pretty solid as far as barebones black metal (with some death influence). The album has a nice, dark atmosphere which meshes well with its subject material, cover image, and so forth. But few if any of the compositions will stand out in such a crowded field.

"Doomed by the Scythe of Disease" ushers a simple, creepy guitar line over the shuffling, tin sound of the drums, while the vocals have a wooden, bark-like tone that straddles the border between death and black (reminds me a little of Graveland). "Lycanthropus - Ex Tumulus Preliator Exsisto" is a better tune, with a slow, driving rhythm that channels early Darkthrone. Though I wouldn't call it exciting, the track drips black, evil ichor, and even when it picks up to a rhythm much like the first song, it still delivers the goods. "Nekyia (Hideous Rite of the Spilled Blood)" begins with an evil melody, which winds into an even more serpentine pattern as the drums softly crash into the composition. "Resound the Hooves of the Army of the Deceased" is a pretty standard charger, with more Darkthrone influence, and in "A Black Skullbanner Appeared from the Corpsegates" you could hear a little In the Nightside Eclipse, without the keyboards. Of the remaining track, "13 Urns" and "Spectral Shades Around the Sepulchre" just sort of whistle past, while "Blood on the Altar of Dis" builds a nice, creepy rhythm (with the bass peeking its nose out below) before it too transforms into a dull blast rhythm.

There's really nothing too harsh I can say about this album. It shows a clear improvement over the demo, and maintains a persistent, grim atmosphere which makes the very basic rhythms and riffs more enticing. But with so many other black metal albums to reach for (including the band's own influences), it simply would not scream out at me for further listening, despite the overcast skies of old it conjures through its sheer existence.