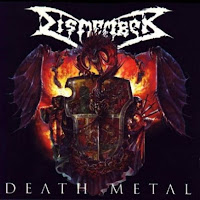 I remember first picking this album up when it was released, and thinking how profound a statement it was to exclaim the album title, Death Metal, in an age where many of Dismember's peers were drifting off into more melodic territory; and their 'co-founder' of the Sunlight sound Entombed taking the death'n'roll a little too far. Ironically, this was one of Dismember's more melodic records to date (alongside Like an Everflowing Stream); though the band's tone is harsher than peers like In Flames or Dark Tranquillity, there was a similar sense of glorious, thrust and charge not unlike Slaughter of the Soul, which was by this time making massive ripples across the world (especially here in the US).

Regardless, as one of the pioneers of the style, Dismember is entitled to a little glory, and Death Metal was a fairly fetching album for its day. The mix of the album is a little less polished than its predecessor Massive Killing Capacity, and I rather prefer this dark, treacherous approach. I also prefer the song's more evil tracks like the bombastic groove of "Let the Napalm Rain" or "Stillborn Ways" to the more melodic "Of Fire" or the album's single, "Misanthropic". The latter half of this disc is consistently brutal, providing further churning memories in "Bred for War", "When Hatred Killed the Light" and "Ceremonial Comedy". "Silent Are The Watchers" pumps out some purely Maiden guitar melodies, which make a nice balance for the heavier groove of the verse. "Mistweaver" ends the album on a death/doom note.

Death Metal has that good old Sunlight veneer that so many bands of today are trying to emulate, and aggression in spades, though often tempered through a more accessible array of melodic hooking. Dismember are one of those bands I have consistently enjoyed, yet never felt capable of producing a masterwork. They don't really have a Left Hand Path, or even a Clandestine. 12 years later, I still haven't heard one. This a good album, as are many releases, but not quite so profound a statement as its title would imply. I still favor Dismember's debut above the rest, but this and Massive Killing Capacity are decent if you enjoy the style.