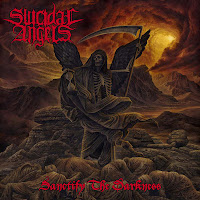 Nuclear Blast has snapped up yet another thrash metal band, and if this isn't proof of the genre's official 'arrival' (though it never quite departed), I don't know what is. Suicidal Angels is a Greek band akin to Released Anger. They play a heavier band of thrash with a slight touch of death metal, and a riffing style only marginally derived from the Germanic sounds of Sodom and Destruction. The band is fast, crisp, furious, and thankfully they do not blow hot air out of their asses in the form of 'thrash' titled songs or excessive retro mongering. Sanctify the Darkness is actually their second album, and continues the blasphemous lyrical spew that permeated their 2007 debut, Eternal Domination. Disease and corruption of Biblical proportions dominate the lyrics, and Nick Melissourgos has a decadent grit to his vocals (partially imbued by his accent) which helps them stand out.

Suicidal Angels is at first "Bloodthirsty", but though the song picks up in a frenzy, it's not the best foot forward for this album, simply sounding like an average Sodom sound-alike. "The Pestilence of Saints" is better, with a good thrust to the lead-in rhythm and a brief Slayer-like breakdowns, before the solid verse riff. "Inquisition" opens with a death metal rhythm, proceeding through a mid-paced thrash shuffle and then into a faster death/thrash rhythm with Sodom and Pestilence influences. "Apokathilosis" breaks into a nice thrashing trot and has some wild leads, and "...Lies" once again evokes the forceful, fanatical riffing of Sodom and Slayer. As for the album's latter portion, there are some solid tracks in "No More Than Illusion", "Beyond the Laws of Church", and "Dark Abyss (Your Fate is Colored Black)".

This is certainly no original band, and not about to steal the throne of Greek thrash established by Flames a few decades past. But their energy is as infectious as their influences would dictate, and it's a fun listen, although the tracks do start to feel very samey throughout. The mix is good and punchy, with the crisp licks and light hammering of the drums in great balance to bear the brunt of the unkempt vocals. Sanctify the Darkness is at least a superior offering to that being produced by the other old school thrash bands who seem to make waves these days, a sign that the band has been plugging away for years. But I would never reach for this album over the source material.

Highlights: Inquisition, Apokathilosis, Beyond the Laws of Church