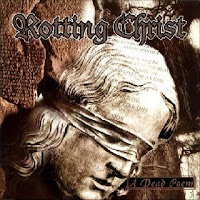 As is often the case, I find myself at odds with the majority when it comes to rating Rotting Christ's discography. While many seem to favor the raw, old school sounds of Thy Mighty Contract and the overrated bowel movement Non Serviam, I tend towards the middle of their career, in particular Triarchy of the Lost Lovers and this 1997 gem, A Dead Poem.

Rotting Christ were trying something new here (starting on Triarchy): take the very essence of black metal, slow it all down, steep it in the mystical lyrics of your culture, acquire a taste for classic metal riffing, and dowse the entire affair in glinting, mesmerizing melodies. It's no surprise these two albums were the point at which most people started to take notice of the band, and the point at which the Basement Legions decided the band was a sellout, and thus crept back into their cavernous dwellings to complain about something else.

Though it has never met with 100% of my satisfaction, A Dead Poem is quite the effort. It opens with the beautiful anthem "A Sorrowful Farewell", and how could one forget those amazing guitar melodies? If you could bottle glory, this would be at least 50 proof and worth every swaggering step of drunkenness. The vocals of Sakis Tolis are at their most emotional on this album, but emotional as in painful, tortured and spewing melancholy as if it were germs that could infect the listener. "Among Two Storms" begins with a playful, unique rhythm while deeper guitars wah off against the backdrop and the harsh vocals. "A Dead Poem" loses its watery tranquillity for some more bludgeoning glory, and "Out of Spirit" captivates through its winding scales and chugging menace.

Half-way through, and no signs of letting up. "As If By Magic" is turbulent and atmospheric, echoing at you from the sides of Mount Olympus. Next time you play God of War, turn down the volume on the game and listen to this instead. "Full Colour is the Night" rocks a lot like the stuff countrymen Nightfall were doing at this time, and "Semigod" transforms from grim tribal wanderings to spectral gothic miasma. And you've yet to strike the memorable "Ten Miles High", the haunting "Between Times" or the sunsetting skies of "Ira Incensus".

A Dead Poem is truly colossal, like the works of myth it embodies, but it is not a perfect record. There are a few brief moments in which you can fall out of its absorbant qualities and hover over a chasm of ennui, but these are greatly outnumbered by the rest of the material, which clutches at your heart like a choir of angels preparing to tear you into the afterlife.

Highlights: A Sorrowful Farewell, As If By Magic, Ten Miles High, Ira Incensus