Skeletal Augury - Victory of the Holocaust (2009) 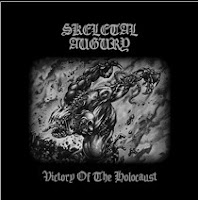 It's fascinating how a cultural context can alter the face of a very familiar brand of music. For all purposes, China's Skeletal Augury perform a black/thrash mix with riffing not unheard of in the days of early Bathory, or used by many Swedish artists who held the torch for that sound (Bewitched, Swordmaster, etc). But there is something almost intangible about their riffing, drumming (via machine) and vocals which make this debut album, Victory of the Holocaust, a refreshing listen.

The first full-length from this band, Victory is following up a pair of demo releases from 2008, and I can honestly claim I've never heard a Chinese band so evil and well versed in what makes a good, pissed off thrashing. The band could not give a damn, they just thrash you with each of the 8 metal tracks on the album (there's a pretty cool intro/outro also). The namesake "Skeletal Augury" transforms through a crisp, punchy old school German thrash rhythm to some blasting with bleeding melodies, and then a driving, weird stream of chords as the drum machine breaks into a double bass. "From Pagan Flames" uses some cool samples from monster movies before another ripping thrasher in the vein of Bathory and Venom. More samples initiate other good tracks like the punk/thrash tornado "Black Metal Redrum" and the bursting "Total Maniac".

The album sounds good for something produced on so low a budget. Vocalist 'F' has a crumbling, cracker-filled black rasp which is both cute and vicious, adding much to the band's riff slaughter. Even though the compositions aren't original, there is some evasive quality which makes the band feel slightly unique. This is the type of record that would do well by a release through Hell's Headbanger records, it truly fits the mold of true old school hostility.