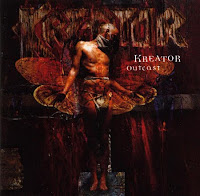 Beginning with Renewal in 1992, Kreator started a phase in their career of mild experimentation, which would last five albums until returning to 'normal' on 2005's Enemy of God. Like so many other bands of the 90s, the pressures of metal's decline and the rise of other, alternative musics seemed to shake itself off on the Germans, thus provoking an evolution of sound. To their credit, Kreator still felt and sounded like Kreator throughout all of these works, even the much maligned, Kreator-lite album Endorama. As far as this perior, I feel Renewal was the brightest and the best, an album that has truly grown upon me with its brand of grim, industrial thrash metal, but Outcast was no slouch.

The outside influence on this particular album is a rowdy punk/hardcore aesthetic, in addition to some hints of industrial noise, and the result is a pretty even smorgasboard of fist pumping Kreator-core anthems that range from fun to just there. Do not be misled by my description: the album is in no way silly or anarchistic. It retains the social political consciousness that Kreator has been scripting since Terrible Certainty. It's simply got a punk aesthetic fueling it, which is little surprise, as Mille and crew have always been fans of decent punk. This manifests in tracks like "Phobia", "Nonconformist", "Against the Rest" and "Whatever It May Take". But they're not alone here, the band has written some simple (by their standards) thrashings like "Alive Again" and the groovy "Forever", which is one of the best songs on this album. There are also a few tracks like "Enemy Unseen" which make use of the industrial waste backdrop and provide a foreshadowing of the band's dreaded Endorama to come.

As far as atmosphere, the record is mixed extremely well, and despite the various tempos the tracks will move at, it all comes together to create a consistent experience, though unlikely to be memorable unless you're a diehard Kreator fan who followed the band through the peaks and valleys of their 90s output. I can draw some slight parallels here to other industrial/metal bands of that decade, a little Pitch Shifter, a little Thought Industry, but mostly to sewer thrashers Prong. Outcast is not heavy on electronics, they are used for sheer atmosphere. Also of note is that Kreator had recruited Tommy Vetterli (aka Tommy T. Baron of Coroner, another band to experiment with a cold industrial edge in the 90s), but I would consider him wasted here. His playing is fine, but being condemned to such simple song structures must have felt like Hell to one so talented. Or maybe not... The drums thunder, and Mille sounds quite good using these simpler patterns of lyrics and repetition.

Outcast is not a failure, far from it. It's an interesting change for the band which brings forward a few of the ideas initiated with Renewal. I like this album far more than its predecessor Cause for Conflict, or the following Endorama; just don't approach it with the thought you're going to hear Extreme Aggression or Coma of Souls' wall of manic, incredible riffing thrash.

Highlights: Phobia, Forever, Enemy Unseen, Whatever It May Take