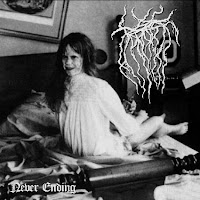 Could China be the next black metal capital of the world? Well, they may first need some stronger bands, but those that exist are at least giving it their best effort. Tomb Sound is a young band releasing their first demo, Never Ending, a calamity of vile and morbid black metal with a clear influence from bands Burzum and Mayhem. Though it's noisy as all primal hell, there is a charm to the band's unrefined hostility shining through which could develop into one of the most cult forces in far Eastern blackness.

Tomb Sound is the work of two gentlemen. Morbid Fish (yes, Morbid Fucking Fish) programs all the beats, dowses them in hissy broiling guitar riffs and feedback, and then adds eerie orchestration through the synthesizer. Frontman Lau then crafts misanthropic, yet thoughtful lyrics and screams them into the mix like the unfastening of a serial killer's razor.

Expiation is never being,
Everybody is struggling,
Trample others.
Why you yearn towards the light,
but forgot the intrinsical darkness?

Can anyone answer that last question? Strange enough, the lyrics really work with the band's chaotic, vibrant compositions. Beyond the ambient intro, and before the great closing instrumental, the songs are quite hard. "Revolving Tomb" is one of the most vile tracks I've heard lately: the crashing hiss of cymbals and the surging rhythm guitar sounds like a condemned building being blasted over from beneath, Hell's legion about to use the resulting crater as an entry point to bring justice back to the world. "Nightmare" has a despotic energy, even though the synths and bass and guitars all mirror one another and perhaps take the single riff too far. "666" is a little more glorious, another of the better tracks here. "Freezing Dream" is a nice keyboard piece with some acoustic guitars, a totally different side to this band.

When all was screamed and done, I didn't come away from Never Ending in love with the band. It's not a bad demo, and they're new. There is an enormous potential here to produce some of the most disgusting lo-fi black metal ever heard from the most populous country on Earth. I'll be waiting to hear it.