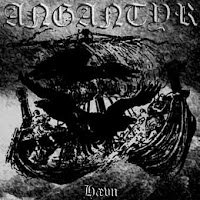 Danish maniac Jakob Zagrobelny is clearly a very talented individual, and his band Angantyr is one of the best of the black masses to take Bathory's primal Viking core from the Blood, Fire, Death album and just run with it, or rather, sail with it... Hævn is the 3rd full-length, on which Zagrobelny, or Ynleborgaz, or whatever he is calling himself, has polished up the more repressed, buzzing atmosphere of Sejr into a more accessible whole. That is, more accessible if you enjoy hostile Viking black metal with no light at the end of the tunnel. There is a purity and longing in his compositions that I find refreshing, even if they are not stylistically innovative. Aside from the guest cello, all instrumentation is handled by Ynleborgaz alone, and one must admire this rather painstaking process, especially when the result is the very muster (or better) of many fully formed black metal bands.

Grim and endless. These two words define the focus of Hævn's 7 tracks, many of which run between 8-11 minutes in length. Indeed, this is over 70 minutes of music, so if your attention span sputters at reading beyond the first few paragraphs of this review, you're probably not cut out to lose yourself in its moribund, maritime pleasures. The songs do not offer a large variety of tempos, each is self-contained but will often batter away repetitiously for moments at a time without even the subtlest of changes. It's a formula that has failed a great many black metal records, but somehow it succeeds here.

"Et Varsel Om Død" provides the first 8 minutes of the album, commencing with the aforementioned cello player, then rattling into a hostile blaster hymn at around 1:40. The notes are chosen for their streaming sorrow and conjuration of epic death; while you may be hearing them often, they rarely grow tired, and Angantyr will subly shift back and forth and then to a slower pace for the climax. "Thulens Ord" feels as if the first song were interrupted so Jakob could take a breather from his black jeering, grab a drink, and then charge directly back into the fray. Breaks in the drumming create a sad, emotional onslaught, like a drowning man who dreams of a shore just out of reach. The opening rhythm of "Baghold" has a powerful, if understated majesty which is very reminiscent of Bathory, and the track only gets denser as it progresses. "Tågefolket" follows at 11 and a half minutes of spewed venom, and can grow trying on the patience, as it only lets up for a warlike vista and then a return from the cello near the end. Fortunately it's good enough to never fully engage your sleep mode.

The latter half of this burning longship is initiated by "Danermordet" and its howling sample, and more of the mid-paced, swaggering riffs that Quorthon could have crafted nearly two decades before. Again, no light at the end of the tunnel. No overarching melodies, just the melancholic thundering with the rhythm guitars carve into the forceful thrust of the drums. "Fødslen Og Byttet" follows suit, the last fraying ends of sanity dissolving at the nearly 10:00 mark, before the real epic of the album sets in. "Blod For Blod, Liv For Liv" is the 17+ minute crown of this work, ranging from the faster pace to the rolling marches of everything previous, and then to finally rest in an extensive cello/synthesier segment.

Despite its superior standards to any of the previous Angantyr records, Hævn is just black enough to get on your nerves, if you aren't prepared to commit yourself to its bloodstained, atavist depths. Even taken individually, the tracks are an 8+ minute investment of time. But the writing is solid and there is just enough variation in the rhythms to hang you at the edge of attention. This is not a band to break tradition, and there is nothing here that you haven't likely heard already, but overall the album is well-done, and if you can stick with it for its entirety, you are guaranteed to lose all hope.

Highlights: the long, sweet collapsing of lungs as all oxygen and life emigrate your tired body

One of my favorite albums.