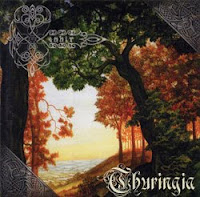 Menhir is a band who have made subtle mutations upon their sound, to slowly improve through the years into their current form, which has a cleaner, polished interface. But it's not difficult to hear how they arrived at such a form, as their earlier output maintained pretty high production standards for the pagan black metal sub-genre, and as early as 1999 they were writing some fairly crushing material with a load of atmosphere, in part through the synthesized orchestration and in part through the guitar melodies that constantly erupt over the driving bass and chords below.

Heiko Gerull dominates the album with a large rasping voice, full of depth and snarl. The cleaner vocals are a mixed bag; while they soar and feel sufficiently traditional in their arrangement, they can often border on distracting dorkiness. The lyrics here are in German, so if that's your first tongue, you may have a differing opinion on the the latter delivery. Regardless, the rest of the band more than compensates for a few 'meh' vocal lines. Manuela's keyboards create the perfect canopy for the core metal aspects, and Roman's guitar work is impeccable above a very functional rhythm section. Combined, the band creates some glorious work which is very difficult to listen to without summoning forth memories long before your time on this Earth; memories of war and victory, of loss and despair, the perfect geist for the atavistic gray matter that dwells within all of those with European blood, self included.

The "Intro" to Thuringia has big keyboards and big guitar riffs, a cycle of melody that steers the procession directly into the thrust of "Die Kelten"'s rolling chariot of majesty. Here the band offers a preamble of what you will be listening to for the next 36 minutes...great, drifting guitar melodies that surge across the symphonic blackscape, Gerull's black barking adding an element of darkness to what are otherwise quite uplifting scenes from a stained glass window. "Schwertes Bruder" cuts right back into the fray, with some excellent guitar flourish, even the bouncing clean vocals cannot bring this one down. The keyboards continue to hover above the metal, not missing a step as they 'elevate' the sound into something epic. Without these, I'm not sure the material would work. A rousing acoustic bridge is also used, though briefly. The title track follows here, a faster piece with fast rolling double bass and vibrant atmosphere, yet more desperate than the previous pieces. "Einherjer" opens with the sounds of battle, yet they sound almost...cheerful in a grim fashion, perhaps due to the buzzing array of guitars that slice through the violence. This is a cool, driving song with some nice bass lines, in fact one of the best on the album, and the clean, deep vocals here are actually decent.

"Das Kleine Volk" is another beautiful smiting, the synth and guitars are quite lush and moving, sad melodies resonant through the towering atmosphere. It's like staring up at some ancient oak tree, its leaves shifting red and yellow, falling upon you as if to bless your insignificance to the greater flow of time. The band then enters another of their rolling compositions, "Bonifatius", which uses some anthemic power metal guitar melodies to drive home its glory. The next track is an instrumental, but nearly 6 minutes in length. The music is quite good here, but it does not differ much from the other tracks, and one almost wonders if it were just a matter of not coming up with lyrics in time for the studio. Still, an instrumental track from Menhir is better than no track, and this one is captivating on its own merits. To close this sophomore album, the Germans chose to cover Bathory's "Woman of Dark Desires", and though it sounds good and violent, I was actually perturbed that the band did not choose to steep it in the symphonic bliss of their own material. The keys do appear late in the song, but it might have a better cover had the entire composition been bathed in the glory we had come to expect.

All of that aside, Thuringia is an incredibly strong album. It may not provide the most memorable moments of any symphonic/pagan black metal album in memory, but the performance is tight and the entire experience is balanced and professional. There's not much actual folk here, and there isn't a lot of diversity. Instead, they hit you with the same general configuration to each composition, but it's good enough that you likely won't care. Apart from the more recent, amazing Hildebrandslied, it's probably their strongest, most cohesive effort, worth tracking down if you enjoy pagan/heathen metal bathed in graceful keyboards and an actual studio recording.