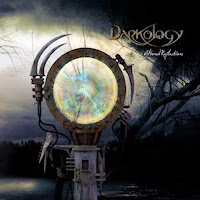 Darkology is an impressive collaboration between vocalist Kelly Sundown Carpenter (who has done stints with Beyond Twilight and Outworld), Brian Harris (Solstice, Firewind, Vainglory and others) and his brother, guitar god Michael Harris (Zanister, Surgeon, Arch Rival, and his other solo projects). Despite the otherworldy science fiction concept, which provides for some interesting and inspiration, if a little cheesy lyrics, the band is rooted in a pretty straight forward style of organic US power metal with some thrash and progressive influences. The album is a pleasure on the ears, from its quality low end mooring riffs to Carpenter's sharp voice that can successfully navigate multiple ranges without losing its quality.

This guy can scream, he can sneer, he can croon, AND he can cast an almost robotic effect over the music, which makes him the perfect match for the album's far flung lyrics. I would place him in the company of Warrel Dane (Nevermore), Rob Halford and Nils Rue (Pagans Mind) for tonal quality and the ability to pierce your ears without any jewelry required. "Violent Vertigo" is a strong opener, as Michal Harris' leads burst and squeal among the heavily rocking undergrowth, brother Brian's drumming calculated but vibrant in that live, jam room quality. "I Bleed" is an edgy, dark power ballad with Carpenter's vocals swirling about like a vortex alongside alongside some highly atmospheric guitar work. "Dark Energy" opens with a piano and synth ringing out into the cosmos, picking up into 7+ minutes of varied fury and tranquillity.

"Nobot" is one of the darker, groovier tracks, with Harris spasming everywhere on the guitars, more of his little pieces of flair searing across the rhythm and swerving bass lines of Mike Neal. "Eyes of Argus" offers you a bit of Harris shred dementia, but only a little, this is not a wank band, and the band surges into one of the strongest tracks on the album, with Carpenter soaring above the melodies and deep, epic construction. "Aura of Xhad" is sheer power metal, with a truly headbanging opening trot and "Alone" is like Dream Theater jamming with aliens. "Revitalize" rocks, and the finale "Trance of the Gorgons" is nearly 10 minutes of the best power/prog metal I've heard lately, with much to discover through numerous listens.

Altered Reflections is as polished sounding as the members' repertoir would imply, and yet it's kept quite savage through the composition and convincing vocal performance. Most of these guys could go off on random tangents if they so desired, and yet they don't. It sounds like a BAND. Michael Harris reins in his performance so it suits the writing, yet still offers a threat of what the man might do if he just opened fire. It's no surprise, he's got a lot of experience with decent bands and, hey, the man backed Leather Leone for her solo album. But I digress.

This is not a perfect album, as there are a few moments (and only a few) where you just want the part to end so you can hear what they will dizzy you with next. But if you enjoy power/
progressive metal and wild sci-fi concepts, this is pretty much the best you've gotten lately, or are likely to get this year.

Highlights: leaving Earth for a little while

Verdict: Epic Win [9/10] (with dauntless force and no remorse)