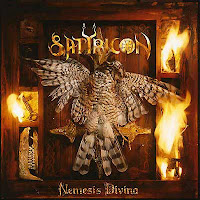 Nemesis Divina is an album I truly wrestled with in the previous decade. Upon its release, many of my friends took to it instantly. It was one of the most popular black metal works among the (admittedly) small circle of fans at University, but I remained steadfast and unimpressed for years. For some reason, I just didn't grasp it...I felt it to be chaotic, disjointed and unmemorable. Ambitious, perhaps, but lacking that secret something.

In hindsight, I must have had a bit of a gray matter leak, because years later, as I was in a recording studio myself, "Mother North" came on the stereo during a snack break. I instantly recognized the song, but then, before indifference could sink in, it finally just dawned me. Damn. From that point on, I dusted off my hard copy and it re-entered my regular rotation, and it has since become my favorite release from Satyr and Frost.

Nemesis Divina is a lot of things. It's atmospheric. It's pretty complex (at least when compared to most black metal of the era). It's evil, but at the same time, majestic. It stands at that precise crossroad where the raw and wicked, unrefined sounds of the black metal underground met the larger studio budget works that were only being produced by a few bands of the genre at the time. This was a record which was nearly at the level of a Transilvanian Hunger, or In the Nightside Eclipse. And yet, it is more accessible than either, with a sensitivity for melody and light synth touches that add only a malleable depth to its bevy of savage riffs, which stuck at you like the pinions of ravens' feathers.

"The Dawn of a New Age" is fittingly titled, as a few lurching chords strike like red rays of clouded sunrise before the cry This is Armageddon.... and what follows is a beautiful, glistening nuclear holocaust of Frost blasts and well written guitars, like the infectious passage at the 1:50 mark. Satyr is assisted in the guitars here by Nocturno "Kvelduv" Culto, of Darkthrone, so it was only a matter of time before I submitted. "Forhekset" kicks in for a brief volley of acoustics before a truly leveling rhythm of hellish, thick melody. The guitars writhe below the verse and bridge, along a demonic current that transforms the heart into ash. As with most of the album, the synthesizers here are very minimal, used only to create an elevation behind particular rhythms, and never central. "Mother North" hardly needs an introduction, as one of the more popular Norse black metal tracks in history. The rhythm guitars bleed here, both the glorious lifeblood of the land. Sinister, biting like the wind, burdened below the transcendent synthesizers and clean intonations of the backing vocals. Even through its latter half, each new riff provides a desolate and thundering layer to the charge. "Du Som Hater Gud" features lyrics that were written for Satyr by the other half of Darkthrone, the immortal Fenriz, and the track is more of an eerie, straightforward black metal peace, still adorned with serpentine riffing and some fine piano touches near the climax.

"Immortality Passion" is festooned with symphonic bombast and warlike drum battering, over the sneer of gently crashing cymbals and a twisted, hypnotic guitar rhythm. The percussion and anthemic march of the bridge mark some of the more glorious moments on the album. "Nemesis Divina" itself is perhaps the most grim piece on the album, with Frost's calculated chaos and some jarring, sawing riffs that slice right through the ghostly atmospheric keyboards. The track picks up into kinetic violence, an excellent slew of riffs which conjure up the aggression of fast 80s speed/thrash. "Transcendental Requiem of Slaves" marks the closure to this epic beast, an instrumental with some lush guitar work that culminates in mesmerizing, hypnotic chords and synths that lead you off into the dusk.

Nemesis Divina is far closer to the style of its predecessors (Dark Medieval Times and The Shadowthrone) than anything the band has released since. While I'm a fan of their modern, black rock impulses, making for some vile grooves, I can't help but feel this album was the pinnacle of their output. The irony that the object of such initial indifference has grown into my go-to Satyricon record is not lost upon me. It's a damn fine record, and being wrong rarely turns out this well.