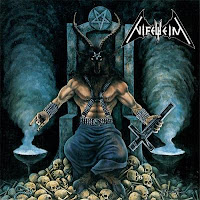 One of Sweden's most uncompromising necrocults, Nifelheim basically begin where Quorthon left off with his early Bathory albums, and then proceed to channel Hell directly into your lobes. Unconcerned with progression or technicalities, the brothers Tyrant and Hellbutcher write ugly, ghastly, beautiful anthems of Satanic aggression, loaded with more impaling hooks and spikes than even the band can fit on their lethal stage attire.

If you're looking for a perfect bridge between the raw, 80s speed of Bathory, Slayer, Venom, Destruction and Possessed and the new blackened consciousness of the Norse and Swedish scenes emerging in the 90s, look no further. In addition to Tyrant, Hellbutcher, and Demon, the lineup for this album also includes the two Jons from Dissection. The entire sound of this record is scratchy, fuzzy and grating...supremely hostile. Any of the 8 tracks would make a perfect soundtrack to a stabbing or grisly cult activity, from the grinding frenzy of "The Devastation" to the all out blitzkrieg of "Witchfuck". I can't vouch for ever song's fluid quality, there are 1-2 which take a backseat to the rest, but standouts include the lascivious pounding of "Storm of Satan's Fire", the charging "Black Curse", and the rocking, rollicking melodies of the devil driving "Sodomizer".

This is sadistic fare, a must for fans of the early Satanic Slaughter work or the first three records of Bathory, as the three share a similar dismissal for the more complex work that their peers like At the Gates were producing. Though persistent in its occult, violent vision, not every song on this debut is equally memorable. "Witchfuck" is cool, but not as memorable as the rest, and I only liked one part of "Unholy Death". As for the rest, sheer insanity.