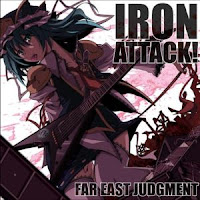 Does Iron Chino ever sleep? Since 2007, he has released 10 full-length albums of instrumental power/thrash metal, in addition to a pair of split releases. Now, were these compositions simple and uninteresting, it might not be such an accomplishment. But every track on Far East Judgment would probably make a damn good power metal tune with a vocalist attached. As they stand, they're already pretty good; highly recommended if you like Nobuo Uematsu's Black Mages project, or the metalized Castlevania tunes on the Dracula Battle Perfect Selection albums.

The formula is simple: adorn your cover art with a cute anime chick and a guitar, then stomp and shred your way through an album of intense, catchy tracks that are heavier on the riffs themselves than the leads. It makes for a great soundtrack while playing games or racing your car. There are some hot tracks on this 10th full-length, such as the burning "Ex.Human Operation" with its driving Judas Priest-like rhythm and flurries of leadwork. "Far East Judgment" is a great Germanic speedster with some intense melody. "Sleeps Again" some neo-classical acoustics and scales to create a beautiful, elegaiac atmosphere perfectly suited to any haunted castle adventure. Other interesting tracks include the colorfully titled "Brightly Colored Vegetables Are Insufficient" and the driving "Black Trajectory", with it's great synth lead-in.

Chino has clearly been working on the production values with each subsequent release, and he's reached a new milestone here with Far East Judgment. The guitars and synths sound great, and though they're not the featured facets of the band, the rhythm section at least gets the job done. This is mostly metal for video gamers and anime freaks, but since I fall under both of those categories, I really enjoyed it. It also might bring some back to the heydays of 80s instrumental shred albums, like on the Shrapnel label. At any rate, one has to admire the man's commitment to this style and his wealth of output.