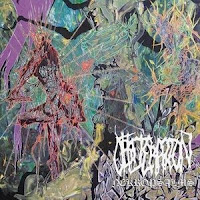 Norse death metal has not truly seen its day since the era of Molested. Sure, Blood Red Throne has done their very best to keep our corpses rotting in the interim, but they have recently been joined by another slowly gathering force, Obliteration. 2007's debut album Perpetual Decay was a fine introduction to the band's atmospheric, old school festering horror, but their second splatter, Nekropsalms, takes this one step further, a rambling and decrepit offering that truly tests the dank waters of the form (much like Molested did those many years ago). The word to describe this album is: morbid. Obliteration do not struggle to impress you with fast, blasting hyper-rhythms or maniacal displays of chug and virtuosity...they can create a hypnotic fermentation through sheer willpower and minimal hints of progression.

I seriously felt maggots birthing in my eyewells and cobwebs forming across my beard as I listened to this album. It is the true sound of rot, the horror of the grave as the bodies moulder and commit themselves to the cycle of micro-organic rebirth. "Ingesting Death" starts with roaming guitars and bass, ellipsing into strange seconds of discord, like the last light dying from the eyes of the recently deceased. If this doesn't creep you the fuck out, "Catacombs of Horror" will absorb you like a river of sentient molasses. Slow, chugging beneath the deep, desolate vocals of Sindre Solem, with some freakout bass effects and glinting chords to add just enough melodic shine to the destructive depression. The band clearly has their roots in death/doom metal, and a healthy (or unhealthy) amount of influence from pioneers like Autopsy, Obituary and Death (the death metal Death, before the cosmic hippy boredom). Just when you thought all would be crawling along like a perpetual bowel movement, the track "Exterminate" opens with a moment of broiling slaughter, bouncing bass and infernal thrust. "The Spawn of a Dying Kind" transforms creepy, wailing guitars into another slow, crepitating abysmal vomitscape, and "Nekropsalms Evoke the Frozen Age" indeed. "Styxerian Path (Into Darkness)" is another track with a faster intro, which crashes about like a decapitated meat colossus in a slaughter farm, until it finally falls over and the blood slowly saps out of its neck. The album closes with the 9+ minute epic "The Worm That Gnaws in the Night", and we are re-visited by the trippy bass hypnosis and a surge of mid-paced, 'uplifting' rhythms, that later ascend into more grindy material and then a total chaotic collapse.

The band has outdone itself with this release, and the Nekropsalms sound ancient and horrific. Repeated listens continue to offer me more insight into this living death, the album is like being a symbiote inside the null-mind of a zombie as it trudges through a landscape of rotting carcasses, decided where and whether to feed and pondering the parasites that pick at its flesh from their invisible world. Though it's not nearly as chaotic or technically adept, the album reminds of Gorguts' Obscura in so much that it transforms the death metal tradition into a nubile realm of decadent exploration. I would certainly classify this as 'psychedelic' death metal. But not high off drugs. High off decay.

Highlights: Catacombs of Horror, The Spawn of a Dying Kind, The Worm That Gnaws in the Night

I can't wait to catch these dudes at MDF next year.