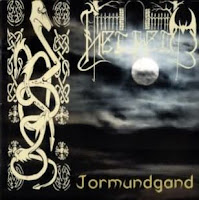 Let it be stated that Helheim's earlier years are quite different from their more recent experimentation phase. Jormundgand, the full-length debut form 1995 is entirely scathing and vicious black metal, and its fastest, few Norse-themed albums of the day were anywhere approaching this level of aggression (perhaps Frost by Enslaved is the best comparison). The vocals of H'grimnir here provide an immediate barrier to entry, because they scream with abandon and it's almost impossible to tell at first if the guy is just kidding around. After letting a track or two settle in, you will realize he is not, and this is some seriously pissed off shit.

The opening track, "Jormundgand" itself, is an immediate thrust into the band's frenzied existence, though even here some aspects of bloodied moonlight atmosphere seek their way through the Asgardian battleplex, with a slower pace here, or some moody choir-like vocals there. There is no fucking pity for the weak, for though "Vigrids Vård" emerges at a slower crawl, the track retains all the grim darkness of the opener, it just forces it into a more digestable selection of rhythms. The drumwork is great in this track, and I love the mood set by the synthesizers just against the horizon. "Nidr Ok Nordr Liggr Helvegr" took me almost completely by surprise with its mouth-harp and female vocals, but the track does grow tiresome and repetetive until its bombastic climax. With "Gravlagt I Eljudne", Helheim return to their blasting momentum, but lack for no level of atmosphere, H'grimnir's cries like a call to carrion feeders that his entrails are ripe for the picking.

Following this, the 9 minutes of "Svart Visdom" makes for the longest track on the album (though most are beyond 7), and the track explores several tormented phases, with the screaming reaching a near pinnacle of vengeful violence. I like the slower parts of the track, when the percussion begins to thunder over the raw rhythm guitars, and the horn sounds are also quite cool where they appear. "Jotnevandring" is a passionate piano piece with some snarling above it, another early reminder that Helheim do not fear branching out their sound, and would do so to great lengths on subsequent albums. "Nattravnens Tokt" is the final track of the original record, resounding with buzzsaw, beautiful guitars and a great, loud bassline that moors it into the cresting Northern waves. If you've got the CD, then you also have "Galder", which is 3+ minutes of screaming and cursing over haunted keyboard atmosphere. Creepy, but not as necessary as the original material.

Jormundgand is a pretty intense debut offering, though few of the songs have really stuck with me. At it's finest, it mirrors and even exceeds Frost in vision and scope, but does lack the timeless energy of that masterpiece. I don't know that I appreciate the early years of this band more than the interesting turns they would take on later works, but there is no questioning the validity of Helheim as one of the founders of the avant-garde Norse extremity.