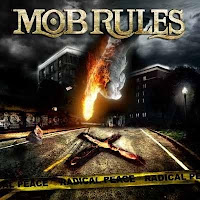 Steadily hammering away at their classic brand of power metal for 15 years now, Mob Rules have slowly refined and improved their song writing. The result is Radical Peace, their 6th full-length and probably their best to date. The band hasn't sounded this much on fire since their first two albums Savage Land and Temple of Two Suns, but they can now match that with the immense production standards and huge atmosphere of this record.

Mob Rules do play power metal, but it's not as quickly paced or anthemic as a lot of their German peers, instead infused with a higher sensibility for the classic sounds of post-Ozzy Sabbath, Iron Maiden, and (obviously) a touch of Dio. The songs here aren't hyperactive attempts to capture your attention through noodling, throwaway melodies. They are all loud and simple, with ringing, powerful chords, and a synthesizer that does not try to overpower them, rather just to blend in. Yet they still carry the veneer of a symphonic band, since Sascha Onnen excels at the placement of his strings and organs. "Children of the Flames" comes trouncing out the palace gates like a displaced king, and "Trial By Fire" transforms a Maiden-like intro riff into a slow march, and then a Priest-like power rhythm. Perhaps the most ambitious track on the album is the 18-minutes of "The Oswald File", which ranges from prog metal to the band's burgeoning power, and doesn't get tiring. "Astral Hand", which was issued as an EP prior to this album, is a fairly catchy melodic hymn, and "Waiting for the Sun" glistens with vocal harmony and some killer verse hooks.

The production here is just too good to be true, rivaling or even exceeding most of the band's big time German peers. It helps that the band plays in a simpler style and really lets every rhythm hook breathe in the mix, and Klaus Dirks offers his own personal effort, striking a fine balance between Ronny James Dio and Angel Dust's former vocalst Dirk Thurisch. This is probably not an album to appeal to fans of Dragonforce or Blind Guardian, or most other modern power metal, but it's got a metric ton of class. Listen at maximum volume.

Highlights: Children of the Flames, Trial By Fire, Waiting for the Sun