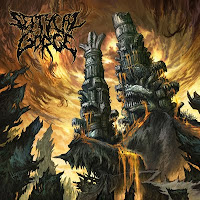 I'm a sucker for the great, traditional cover art that bands like Italy's Septycal Gorge insist upon for their album covers. Otherworldly scenes of bedlam and chaos that stretch beyond the known material realm, into far flung corners of the universe...madness, elder gods, and rivers of woe and flame. Their previous album was just as sexy in appearance, but I felt like the music did not quite live up to expectations. Erase the Insignificant, too, does not initially breathe fire and plasm into my ears. On the surface, it sounds like a lot of other fast-paced, acrobatic, technical death metal with a lesser emphasis on production (like a sped up early Suffocation or the first few records from Deeds of Flesh) and greater emphasis on brutal precision. But take a few more listens, and it is revealed to be a tight and entertaining death metal record which offers spurts of both moshing, brutal slam rhythms and hyperkinetic extraplanar riffing.

Septycal Gorge certainly avoid boring the listener, with 9 tracks that race past at a total of 30 minutes playtime. "Deformed Heretic Impalement" slams out of the starter gate with morbid breathing samples that mutate into Mariano's guttural dementia, with the guitars flying all over the place in complex patterns of alien hostility. "Lobotomia" careens and caresses the ear with a sledgehammer of hatred, as the brain drill descends upon the unwary victim. "Redneck Slanderous Mutation" is forceful and ridiculous, chug-chug-chug bludgeon chug as every last drop of bile is drawn from through your stomach to meet the day. "Aprioristic Discharge" may have forced me to break out a dictionary, but the means by which it slowly creeps into reality and then starts snapping necks leaves no uncertainty. The band then charges through 5 more questions in the Hyperblast category, earning their reward money for each successive crime. Of these, the best were probably the charging "Forgotten Faces of Human Prism" and the noise inducted instrumental "Elegy for the Wretched".

Seek out Erase the Insignificant if you want the incessant pounding of a Deeds of Flesh or Severed Savior record, or if you admire Cryptopsy's earlier work like None So Vile. This is a step above 2006's Growing Seeds of Decay, but not a large transition in style. The mix is rather bland and laid back (as with many of these types of modern death metal works), so it's up to the rhythms and aggression of the band itself to deliver. And they do, at least if you favor this energetic pace and unswerving devotion to brutality.