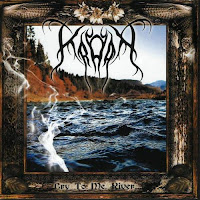 Cry to Me, River... is an impressive feat for a band formed only a year prior, an expansive debut album which very carefully incorporates synthesizers and flutes alongside its raging metal heart. Few bands, even years after this release, are so successful at fusing such elements into a lasting whole, but Kroda have done so with all three of their full-length efforts to date. This is the work of two Ukrainians: Eisenslav (who has put out one other record under the name Volvh), and the more prolific instrumentalist Viterzgir, who also works in Capitollium, Ruina, Dragobrath and his solo band Leadhaze. Both of them perform a myriad of duties on the record, and they do this better than most fully stocked 6-8 piece folk metal bands out there.

I'd like to note that one of my favorite aspects of the album is the production, which is surprisingly bright for it's lo-fi origins. The keyboards feel cheap and cheesy, Summoning level, but this makes them quite endearing and they are never a distraction. Actually I am rather blown away by just how great this record sounded, and wished I could do the same with a few friends; we would never leave the house. The do-it-yourself mentality might render many acts impotent or unprofessional, but Kroda soars within these confines. The drums sound good and centered, for a machine, and the guitars thick and juicy as mead. This is not some band to simply chug along while the flutes score some jingle they've read from their grandmother's sheet music, the riffs are quite important to the whole process. Eisenslav's vocals are harsh but well rounded, an earnest contribution to the thundering Nordic rhythms and lush, penetratin atmospheres.

The album opens, suitably, with the band's namesake intro, "Kroda", laid out in synthesizers with some flutes riding high, and a quiet bass propelling it into the "Endless Path of Legends", which spares no time in producing a glorious charging rhythm over the tinny drum machine. This soon breaks for a cheesy flute melody, but the ensuing riff more than compensates, and the track only gets better as the second blasting rhythm lays flat all disbelievers with pagan glory. "Where the Peace And Calm Were Immortalized" has an excellent, atmospheric intro and yet another of the band's blazing, emotional passages which strikes like sunlight on a snowbank, carpe diem and conquest. When the bands surges into their folksy segue at 1:30, you are right there with them, flagon (or horn) in hand and kicking the slush off your boots. "Hoarfrost of Blood" grooves and grinds and then explodes into a shower of incredible melodies, I love how the bass shifts the tone beneath the riff at the minute mark, and the track later develops this crazy atmosphere over its closing minutes.

Hoarfrost of Blood is glimmering, sparkling,
It melts, scattering by crimson ashes
By the bloody scabs it clotting,
Blackening, growing dim, disappearing in dust

Halfway through and the quality does not dip in the slightest. "Native Land" features even more of the band's ability to write convincing guitar lines within a storming mindset, raging for nearly 9 minutes with only one, very cool ambient break after six minutes. I loved the immediacy of the bells and atmosphere in "Gnarled Cudgels of Thunder" (best song title her), and the lightning rhythms and berzerk, driving flutes in the bridge. "Cry to Me, River (Betrayal of Krj)" is the last original on the album, with a cool hammering riff and another great folk breakdown. Oddly enough, the band closes out the album with a cover of Hypocrisy's "Apocalypse", from their Fourth Dimension album...yet Kroda renders the track instrumental and in their own, unique voice. It's quite good, and possibly a small improvement over the original.

Cry to Me, River... is just about as good as you can expect from a band's first effort, and one of the better debut albums of 2004. Especially for folk metal, this is an impressive and somewhat lasting album. A few of the folk/flute/keyboard parts feel samey, but this would be a larger problem if they weren't all well placed within their songs. I'm thankful that Kroda can balance this with their metal, one side never overpowers the other, and it is this rare ability which makes them stand out in a dense field of wannabes.

Highlight: listen to it outdoors, on a winter afternoon