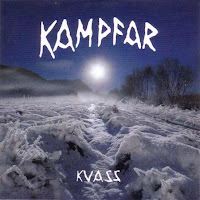 Kampfar was a dominant force in the late 90s, where they produced a pair of highly respected albums in Mellom Skogkledde Aaser and Fra Underverdenen. Risen from the more savage, rough and tumble Mock, Dolk and Thomas renewed their commitment to black metal, but started upon a path of more introspective composition, while keeping the harsh vocals. And harsh these vocals are, almost grating against the lush background of the band's moody and fascinating guitar rhythms. It was a long seven years after Fra Underverdenen before the band would release its third album, Kvass, but the wait was well worth it, as this was a mature work with some excellent odes to the winters past and present, the and an atmosphere with sparks rumination.

The band picked up a new rhythm section in 2003, with John Bakker on the bass and II13 taking over Dolk's drum duties. Though the output is far more restrained in the speed department, this in no way crippled the quality, and in fact the writing process for Kvass produced some of the band's most memorable work. "Lyktemenn" opens with some horrid throats below a scintillating, circular guitar rhythm, the drums slowly working their way into a mid-paced beat, and the band letting this rhythm breathe. And it never wears out its welcome, though it changes little in the first two minutes of the track, before a more powerful, dark surge storms through, accompanied by Dolk's snarling and some tasteful clean backing vocals. "Til Siste Mann" is the fastest track here, though still not at the rapidity of earlier albums. It has a somber and moody sequence of riffs that alter little, though the tempo changes beneath them, and it closes in some sparser, beautiful melodies. In all, a very soothing track, one could close their eyes to it and sleep the sleep of tall trees, mountains and rolling white hills. "Ravenheart" is an exception on the album because the lyrics are in English. It's another generally fast track, and my least favorite on the album, though the end is pretty good.

In any case, the following "Ildverden" is superior, with a thumping bass line and a cold stream of chords that lays itself across the backdrop, like submerging your hands below the ice into the still flowing river beneath. A simple track, lengthy track (almost 10 minutes) which continues to grow as it proceeds beyond its midpoint, and some fine acoustic strings emerge alongside the rhythm, only to signal a glorious, charging riff to come. "Hat Og Avind" returns to the charming lead-in guitar melodic style we heard opening the album, and I loved the drum work below the first riff, and the soaring clean vocals which lurk behind Dolk's harsher tones. "Gaman av Drommer" begins with a slow, beautiful riff that is quickly transformed into driving chords over II13's beat, but never really loses its shining quality, almost a rock song in a black metal shell. This is one of the better songs on the album.

A consistent record, but with the one exception that I found "Ravenheart" less inspiring than the rest of the tracks. Kvass is well mixed, with a similar laid back atmosphere to what Enslaved have done with their past 5-6 albums. The notes have much open air in which to exhale, and the bass is audible and quite present. The vocals are a great contrast, as they contribute the ugliness that the riffs simply do not have on this record. Most of these elements were already present as early as the band's debut album, but the tone here is lusher, not as sharp. The lyrics are rather simple, perhaps too simple for some, but functional with the style. This is a great record, and was a great return after the years of absence. Though not a masterpiece, it's better than the successor Heimgang in 2008, and nearly on par with the first two albums, which are both pretty amazing.