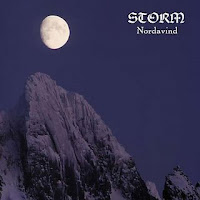 As far as collaborative works, Storm was certainly one to turn a great many heads when it was announced in the mid 90s. A folk metal duo featuring Sigurd Wongraven (i.e. Satyr of Satyricon) and my own personal savior, Herr Nagell (Fenriz of Darkthrone) was soon a trio, rounded out by the excellent Kari Rueslåtten of The 3rd and the Mortal fame. In retrospect, the sole album Nordavind may not have turned out as absolute perfection as one might expect, but it has a great many memorable moments and was far ahead of its time, as countless European folk metal bands attempt to copy it note for note (but with a large cast of clowns dancing about).

The vocals here are threefold: in addition to Kari's meanderings, we have snarls and Fenriz' manly, bold cleans. When they all meet, it can occasionally result in a goofy effect rather than a serious mix, but individually they come off as strong as one might hope for. The guitars and drums on the album are kept quite simple, this is not very grim material and most of Satyr's riffs are quite simple folk melodies made chords. This lends an air of authenticity to what Storm is trying to pull off, and the resulting music is more accessible than Darkthrone or Satyricon.

There are 10 tracks at just over 33 minutes. Most of the songs are short and sweet, though half the playlength is occupied by two longer tracks, "Langt Borti Lia" and "Noregsgard". "Innferd" is merely 95 seconds of keyboard performing a sorrow swell of notes below the samples of wind and rain. "Mellom Bakkar Og Berg" picks up into the band's proper 'style', with some mug swilling, charming rhythms to which Fenriz and Kari offer a duet. The riffs grow doomier and Fenriz starts into a more aggressive shout, which is awesome, but despite its sticky candy melodies, the song does not stand out so far. "Håvard Hedde" lurches forward like something you'd hear at a Viking celebration, the horn being passed to each slavering mouth as the eyes are drawn to the fire and music. "Villemann" offers more somber doom-like folk metal, Kari joining Fenriz as he rolls his native tongue with great skill. "Nagellstev" is one of my favorites, despite it's minute length, with an astouding, if brief vocal performance over a simple drum. I play this one in the morning when I know I've got a rough day ahead.

"Oppi Fjellet" begins to bring it all together, with some solid drum work under Fenriz' musings, and I enjoy how the core rhythm alternates to bring in a more traditional Viking metal romp. "Langt Borti Lia" balances its 7 minute length with a fine selection of Kari's weaving, mystical intonations and some of the better riffs of the album, slowing to a doomed crawl near the conclusion. "Lokk" is just Kari, singing a beautiful melody that makes the blood run cold by the wind and hot with a longing for the past age, simultaneously. "Noregsgard" is the 'epic' of the record, and features more amazing vocals from all involved, over a creeping pensive pace. This track is probably the highlight here, because it lasts long enough for you to lose yourself in its mountains and valleys, emotionally resonant. "Utferd" is just 2 minutes of acoustic guitar and synthesizer, an after-taste really after you have been scoured by the beauty of the previous track.

It's a shame that such a quality project was destined to become a one-off, but if you really enjoyed this then I guess I'd steer you towards the first few albums of Vintersorg, who once wrote with a similar, traditional folk style (and a little more complex). You can also find three of this band's tracks on the Crusade from the North compilation, though two are alternate versions based off songs from this album. Storm is yet another testament to the high level of talent possessed by Fenriz, who has chosen some excellent company here. Along with Neptune Towers, this is one of his more memorable side projects to Darkthrone, and belongs in any discussion as to the roots of real folk metal.

One of my favorites. The drama that surrounded this band was pretty funny, as well.