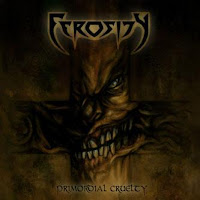 Primordial Cruelty is the full-length debut of the Polish Ferosity, a band with a sound more decidedly old school than many of their peers; and by 'old school' I don't mean early 90s Vader, but versed in the rough and rugged USDM sounds of Malevolent Creation, Deicide, Death, Obituary and Barnes era Cannibal Corpse. Though the band shows a propensity for chugging rhythms, these are all deliciously archaic, deep and heavy, often offset with eerie but melodic picking. Pavulon's vocals are a hammer, stepping out of time from 1991 to once again flatten you, the core vehicle of the band, driving forth the drums and infectious guitars.

This is not one of those albums you pick up and become instantly addicted to. After my first listen through I was rather undecided, but on the subsequent spins each track began to grow on me, and this is in fact a great effort which offers a good variety of slogging paces ("My Seed of Evil", "Revelation Through Consciousness") and more quickened tendencies ("Cruelty Incarnated", "Purity and Depravation") where needed. The band also has a good sense for atmosphere, there are a few songs which begin with creepy intros that again, recall the heyday of gloomy 90s death metal.

I'm certainly impressed by this debut, and it's one of the better old school death metal albums this year which does NOT venture down the Swedish Hand Path. None of the Sunlight studio guitar tones, no brazen use of melody (it exists here, but in a subtle and effective context), none of the complexity of the band's peers Lost Soul, Decapitated, or Behemoth. This is decrepit, bludgeoning darkness the likes of Tomb of the Mutilated, Deicide, The Ten Commandments, and Cause of Death. I'd advise you check it out.