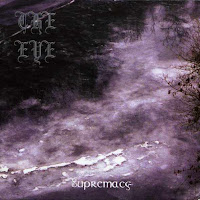 The Eye was an impressive yet short-lived project of Vindsval, who you know better as the frontman for Blut Aus Nord. Only a demo and this single full-length were released, and I feel it's a shame. The material is comparable to what he was doing with that other band in the mid 90s, if a little more accessible. Supremacy tends towards a slower black metal crawl, heavily saturated with keyboards that titillate as they fuse with the beautiful guitar work.

Three of the tracks are short, ambiant instrumentals performed only through the keyboard. Of these, I slightly favor "Aidyl" to either "The Land" or "The Eye", as it features a catchier repetition, delightful and sorrow-sworn. The real meat of the record lies in the full-length metal songs. "The Eternal Oath of Life" opens the album with a pair of alternating, slower riffs, the verse a simple pattern of four chords which the keyboards harmonize. The center of the track shifts the chords into a more desperate pattern. "The Call of a Thousand Souls" has another of these driving, black/doom chord patterns with some cleaner vocals hovering off in the atmosphere. It's catchy but highly repetitious, especially as it exceeds seven minutes. "My Supremacy" is a mite faster, with the drum machine picking up ever so slowly and a wash of beautiful, haunted synth over Vindsval's deeper narrative vocals...silly but catchy. "The Purest Domination in Wisdom (The Eternal Eye)" is once again very repetetive, but does have some nice chord shifts. "Your Wickedness (Bastard Son of Fear)" brings back the lower clean vocals, with some happy synth lines cutting through a few of the less interesting riffs on the album.

Supremacy is a little less raw than the first few Blut Aus Nord albums, and hardly as complex. It would have been interesting to see what the man would produce for this project beyond this sole, complete work, as the quality of the tracks could be improved with more advanced writing. The lyrics explore Odinism and the poetic worship of nature, subjects Vindsval is no stranger to. I really liked the way the guitars, synths and vocals are mixed, with the drum programming just beneath. This is a pleasant enough album if you're seeking simple, ambient/black metal, though it lacks some of the intensity and engagement of his other work.

Highlights: The Eternal Oath of Life, Aidyl, The Call of a Thousand Souls, My Supremacy