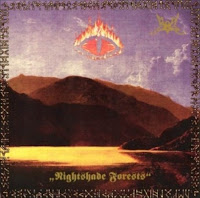 Do not be fooled by the short play format of Nightshade Forests. It offers 33 minutes of music, across four tracks, three of which were culled from the Dol Guldur recordings; the fourth added for this release. Summoning should require little introduction to most readers, but if you are among the uninvited, they play an epic brand of black metal which centers on the use of sweeping synthesizers and fantastic drum programming to support its gnarled, rasping core. The few detractors of the band claim that the band's largely synthetic atmosphere is 'cheesy', but this is honestly what I love so much about their work. It's very imaginative, and truly epic. If you were to close your eyes and picture yourself in the band's focal point (all their music is conceptually structured around The Lord of the Rings), Middle-Earth, THESE are the sounds you would form within you: across the peaks of the Misty Mountains, through the depths of darkened Moria, and beyond.

Now as we are waiting in motherlike darkness
we reopen our history, that once belonged to them
oh, have you seen the end of the bard
never forgotten, the land of sleep,
the time before the birth of the worlds

The drums crack like thunder across the beautiful "Mirkwood", while the guitars blaze in melodic black patterns that serve only as a component to the band's melancholic tapestries of a fictional mythistory. Though this track nears the 10 minute length, I found myself bored not once through its various climates. "Kortirion Among the Trees" is slightly shorter (8:50), and a more lush landscape for its flute-like emulation and the simple, elegaic chords which resound therein, echoes of depth and structure the like of which few other bands can muster. "Flesh and Blood" evokes memories of glorious warfare and the loss of peoples, with a simple, tribal structure bathed in more of the programmed, percussive thunder. Though a pleasure (like any Summoning song) for several moments, it is the one track on this EP that I do not completely adore, as it does stretch beyond its welcome after the midpoint. Fortunately, "Habbanan Beneath the Stars" halts this descent into mediocrity with a delightful palatte of hypnotic drumming and layered ambiance, across the tormented garbling of Silenius.

Not night as ours, unhappy folk,
Where nigh the Earth in hazy bars,
A mist about the springing of the stars,
There trails a thin and wandering smoke
Obscuring with its veil half-seen
The great abysmal still Serene.

Summoning is one of the creative pinnacles in all of metal music, one of the very best at creating a thorough embodiment of concept, while maintaining the raw purity of the form in which they are rooted. It goes without saying that the discriminating listener should own all of their work, for its value exceeds the cash you'll pay by a thousandfold. Mesmeric, wandering and uncompromising.