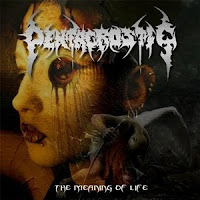 If Pentacrostic delivers old school death metal with a cavernous atmosphere reminiscent of the early 90s, it can be no coincidence. The band has existed for 20 years, though their four full-lengths have been spread out across that priod ('92, '96, '2003, and now this). The Meaning of Life is another album which will offer little on the surface, or little to those seeking technical or hyperactive modern death metal riffing. The sounds are brutal and venerable, summoning hints of Deicide, Malevolent Creation, Obituary, Death, Possessed and earlier Sepultura.

The guitars are bludgeoning but sharp edged, anchored in the deep bass playing and wrist snapping drum work, while Marcelo Sanctum's rasp maintains a higher pitch than many of the band's influences. The band wanders across a number of tempos here, capable of both grinding athleticism ("Canons of Pain", "World's Devastation") or slower, grooving work (like the thundering march rhythms in "Mistake"). I do most favor the moments of atmosphere created through the cutting lead tones in "Is Death...an Illusion of Pain", which also features an early Death-like bridge rhythm. One of the tracks, "Welcome to the Suffering" is taken from an early demo.

The Meaning of Life has a production straight out of the early 90s sound, and while the band does not write the most complex or mesmerizing riffs, they keep the album focused enough that purists will find the band's devotion applaudable. You may have heard this before, but you're not hearing it often these days, and as one of the first Brazilian bands to explore this, Pentacrostic are proudly wielding this banner. I've read that the band's music is considered death/doom, but a single listen through the album will show you this is rarely, if ever the case (unless you count all slower death metal rhythms doom metal). For advocates of the old school.

Highlights: Is Death...an Illusion of Pain, Enemy of Life's Enemy, Welcome to the Suffering