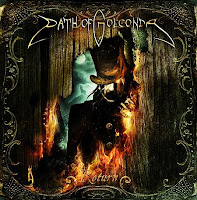 Path of Golconda is a German melodic death metal band which gets a lot of things right, but just lacks that extra song power to push it far over the edge into the memory. Return is their 3rd album, and it boasts a strong production with booming guitars, grooving death/thrash rhythms, harsh and blunt vocals, and a dash of melodic grace and sentiment. It may be best to compare this group to one such as Amon Amarth, because they have a similar approach to writing simpler grooves with major production values that will also transfer well into the live setting.

I've read the band described as a black/death hybrid, but there is very little black metal here (perhaps in influence, not in execution). The band opens with one of the stronger tracks on the album, the title track, which shifts from driving melodic death to some more old school fervor and a big glorious bridge rhythm. None of the riffs here are quite that catchy to stand out, but the track as a whole is very solid and offers you a collage of what you will find on the remainder of the record. "Sharpen the Saw" centers on the huge, simple riffing again for a more death-centric experience, and "The Wolves Are On the Prowl" features some thrashing and breakdowns. Some of the better tracks to round out the experience are the melodic "Under a Derelict Sky", the warlike thrust of "Paler" and the blissful finale "Lily of the Meadows", another of the best songs.

The band really knows how to record an album, of that there can be no doubt. The guitars have this pure, crunchy tone to them, a little less acidic than Amon Amarth but effective nonetheless. The drumming is solid, the bass present and the keyboards and samples used only sparsely, and where needed. If you prefer your death metal 'epic', reliant more on its charging rhythms, largesse vocals and pummeling atmosphere, this is a band you will want to hear. I've not heard their prior albums so I cannot compare it, but this is something I enjoyed listening through once; I just don't know how often I'd travel back to it.

Highlights: Return, The Wolves Are On the Prowl, Under a Derelict Sky, Lily of the Meadows