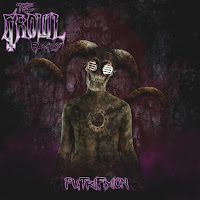 Another old school South American death metal band, The Growl Family offer a very lurching, crunchy sound which again recalls the very early USDM material of Cannibal Corpse, Deicide, and Suffocation among others. Don't be taken in by the band's blunt and silly name, this is some pretty intense fare which is 100% loyal to the roots. Churning, down-tuned riffs vary between flightier, technical weavings and simple, crushing crawls. Rodrigo Alfonso has a very blunt, excellent vocal style with just enough reverb to make it highly effective. There are also some snarling counter vocals that give the music an old Carcass feel, but the riffing is different.

The album is pretty fun throughout, with an ambient/noise sliding into the title track, introduced through big meathook rhythms before a pick-me-up, shuffled mute verse rhythm with squeals. There are some nice breaks into faster, old school rhythms later in the track. But the album gets better with "Back to the Room", a chuggernaut slowly rolling across the plains of hell, again with some sporadic, quicker blast breaks. Tracks like "As Blood Runs Black", "The Sick", "Extinction of God" and "Altar of Maggots" all offer enough slam death to appeal to modern crowds, while they retain an archaic tone and passion for glory of the 90s. I don't always go for the meaty mosh-oriented death metal, but a few of these tracks had me banging my head hard.

Putrifixion is a good debut, extremely primal but fun. There is little virtuosity, and the band's lyrics are pretty much the typical approach to 90s gore without being excessively disgusting or misogynistic. If you enjoy a trip down memory lane, and fancy old school death metal with skill but no over-indulgence, you would be hard pressed to stand still at one of their shows, or sit still listening to this record. Check it out.

Highlights: Back to the Room, Altar of Maggots, As Blood Runs Black, The Sick