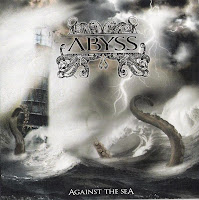 Against the Sea is the 2nd offering from one of several French bands to wear the name Abyss; the previous EP, Silent Depths, was released in 2006. The band has maintained their maritime obsession through the lyrics and titles of this new work, and they perform in a brand of death/thrash crossover that allows for the expansive use of acoustics, and even a guest violin pops up. Riff-wise, it has much in common with the melodic death scene, as the band crafts intricate faster rhythms that surge directly into brutal breakdowns. A little At the Gates influence, and perhaps a little Yyrkoon in there, with the vocals of Alex leaning towards the latter.

There are five tracks here for your saltwater consumption, including "Into the Tempest", a nice 2 minute intro piece with samples of wind, storm, and sea as a crew of men struggle against it. Here the violin first appears, creating a nice contrast, before the bludgeoning riffs arrive over a popping bass tone, and then the band breaks into "Beyond the Lighthouse", with chugging background rhythms below arpeggios and eventually a melodic death burst. It's a good song to showcase the band's talents, though nothing stuck out as very catchy. "Descent in the Nile" has some driving, typical melodeath rhythms with trilling notes and a good bridge that balances some acoustics with shrill electric notes. "The Navigator" was my favorite track on the EP, I like the grooving volley of the verse rhythm and the depressing feel of its bridge lead. "Invasion from the Abyss" closes off the EP with a thrashing over some double bass, with the expected breakdowns and some decent melodies in the middle.

Against the Sea is fairly impressive for a self-produced EP, you can hear everything quite well and the guitars are chunky where needed, and thin and crisp for the leads. The violin touches are subtle but worthwhile, and the vocals are rather blunt and emotional. For some reason, I wasn't engrossed within the majority of the songs, and I feel there are mosh pit breakdowns here where they aren't always needed. I did enjoy the intro, and "The Navigator" more than anything else. However, if you enjoy French death metal bands like Benighted or perhaps later Yyrkoon, it might be worth your time to track this down.