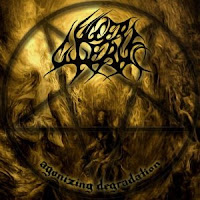 I was mildly impressed by this Polish band's debut. They are able to take a style of death metal I tend to find dull (brutal blast-chug blast-chug with a ton of breakdowns and squeals) and churn out an album I actually like! This is no doubt due to the extremely tight musicianship and great mix of the album.

They also throw in tiny touches that I wouldn't expect to their riffs. For example, as subtle as it may seem, the tiny melodic suffix to the breakdown at the 2:30 mark in "Blood in Her Mouth". Other excellent tracks on the album include the unrelenting "Possession", the dense slower grooves of "Elite", and the epic, rolling "Call of War". They also include a good cover of Morbid Angel's "Nothing is Not". The lead work throughout is quality and creepy.

They have a sound decidedly more akin to brutal USDM than most of their countrymen, and it works. 2008 hasn't been an amazing year for Polish death metal, so I'd rank Agonized Degradation pretty high on the list of albums to check out from that scene. It's not amazing and it's not quite original but it's a consistent and punishing album which will please fans of brutal death metal everywhere.