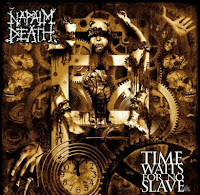 Proof positive that getting older does not necessarily mean slowing down, Napalm Death offers their latest in a string of hi-octane records dating back to the turn of the century's Enemy of the Music Business. While some of these albums like Smear Campaign have been hard hitting and fairy ass kicking, this new album is probably the best I've heard from them since the late 80s/early 90s. It successfully captures their roots, that brutal punk which was partially responsible for launching the grind genre and thus a gazillion other bands. And at the same time, it embraces their death metal transition and a crisp, vibrant studio production.

The idea here is to finish you off as quickly as possible with "Strongarm", an aggressive grinder with mixture of Barney grunts, snarls and brutal gang shouts. If you've lived on, you are met with "Diktat" and its grooving hyper death riffing which explodes into a gorgeous flow of grind and vocal battery. "Work to Rule" shifts harmonic breaks into pummeling blast beats, and then two tempos of great breakdowns. "On the Brink of Extinction" starts with one of the best thrash riffs I've heard all year, and it's one of the best songs here! The title track is complex and well constructed, with some dissonant but melodic riffing amidst the punches and kicks. Okay I'm five tracks into this description and let me just say there are nine more to go, and you will be disappointed with exactly NONE of them.

Time Waits for No Slave is Napalm Death on the top of their game, and I haven't enjoyed one of their records this much since Harmony Corruption, which was quite a different beast at the time. This is not only a pleasant surprise, but the death/grind album to beat in the coming year! Not only a forceful display of energy and experience, but an album of some depth and diversity in the songwriting.