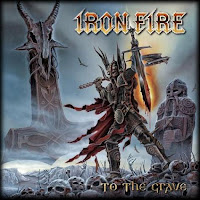 I've always had mixed feelings for Danish power metal band Iron Fire. They've generally been good at composing some catchy tunes, but Martin Steene's very nasal tone has unsettled me in the past. For the past few albums, they've issued some average Germanic 'epic' power metal, with an obvious appeal to fans of bands like Gamma Ray or Metalium. To the Grave is their 5th album and they handle the reins fairly well. It's a solid enough effort with some memorable melodies, and Steene seems to have improved vocally, or rather they are just placed well in the center of the mix and never too distracting. The guy DOES have a great range, after all.

"The Beast from the Blackness" is your epic fantasy fueled German power metal anthem, with hyper melodic picking and keyboards. It works to set up the tone for most of the album. "Kill for Metal" (haha) begins with some sappy, almost grunted narration proclaiming 'new gods of metal'. Granted this is done with tongue in cheek attitude, but still unnecessary. There are a few pretty catchy bits later on the album. "Frozen in Time" and "Doom Riders" are damn fine, epic and melodic tracks. Also, there are no shitty power ballad songs on this album, which is also a nice touch.

The mix is superb and professional like many of their German peers, the band is highly melodic and the lyrics are absolute shit, but this has become the norm for the majority of European power metal, it's just grades of 'cheesiness' now, some work well (U.D.O., Powerwolf, etc) and others just don't deliver. The concept here seems to focus on a kindergarten, bubblegum portrait of Norse mythology. In the end, I will commend this Danish band, this is clearly their best album since the debut Thunderstorm and it manages to avoid many of the pitfalls which turned me off a few of their other works. Lyrically this is tripe, but the musical effort shines through.