Aeon of Horus - The Embodiment of Darkness and Light (2008) 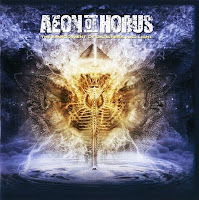 Australians Aeon of Horus have created an impressive debut in the field of progressive death metal, a balance of chops and musicianship and the restraint required in concocting tight, focused tracks. Though this is a band of ability who can unleash polyrhythms and arpeggios when desired, they never wank off with displays of unnecessary technical wizardry. I often detect a slight math metal influence in the songs, in particular the chugging sections, which reminded me of Meshuggah, but these are the exception and not the rule.

The album opens with "3C321", a collection of winding riffs, arpeggios and breakdowns which gets really interesting at its mid point with some of the faster paced riffs and the nice atmospheric break with the synthesizer and guitar lead. While decent, this is nowhere near the best on the album, as you'll notice soon enough when you hear the following "Conquering the Speed of Light", which features some killer speed/thrash riffs intertwined among the discordant breakdowns. "The Embodiment Part One: Of Darkness" features some killer drumming and a tense but reflective atmosphere, accented by some tasteful synth work. "Part Two" is just as good, if even busier, and has some of the better 'math' breakdowns on the recording. "The Pillars" is a nice acoustic track. The rest of the album is pretty consistent, with "Arrogantly Opposing Reality" and "As the Earth Shatters" also among my favorite tracks on the album.

The sound here is very direct...nice and clean so you can capture every note on the album. The band are all impressive at their instruments, but as I mentioned before, it's their restraint and focus on creating adventurous, riff-by-riff compositions that makes this an album worth the time of any fan of technical and progressive death metal. The album's use of Egyptian mythos and cosmic lyrical themes are always interesting. The Embodiment of Darkness and Light is a well balanced attack, a very complete debut. It should see the band a good signing and some attention.